No need for Ireland to resort to knee-jerk reaction 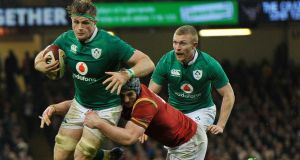 It’s said that the final table tells no lies, but perhaps this year’s penultimate table – so to speak – provides the truest picture of all. England are well clear of the peleton, which in turn is bunched together within a point of each other, and Italy are cast adrift.

With Scotland and France on an upward graph, this is assuredly the most competitive Six Nations in many years, and proof of that will be that a very good team is going to finish fifth. It could be Ireland, if they lose without a bonus point to England, and Wales win narrowly in Paris, presuming Scotland beat Italy.

It could conceivably be the wounded Scots, who are reckoned to have had a fantastic Championship, but more likely it will be the loser of the France-Wales game, or Ireland.

So Ireland now are in the position Wales were in last Friday night, out of title contention, with thus pride and redemption to play for at home, and Lions places.

If Robbie Henshaw had just managed to wrap his left arm around Rory Best, and Ireland won by a point, they would still have needed to beat England by more than ten and with a bonus point to clinch the title.

One ventures too we’d have hailed a fine comeback win against a fired-up Welsh side without Conor Murray for virtually half the game and Johnny Sexton for virtually a quarter of it, during which time Ireland conceded 15 points.

Wayne Barnes had a fine game, and one could well understand why he chose to bin Sexton even if Jonathan Davies had cleverly rolled over on top of him to pin the Sexton down. It’s just that the penalty count was 10-4 to Ireland, and whereas that was the only penalty they conceded inside their 22, Wales conceded five in their 22, including three ruck offences and one collapsed maul.

“I see your point,” admitted Barnes when Rory Best highlighted this to him.

Had Ireland completed the comeback – and there was much they did well to get themselves into that position – player ratings would have been sevens instead of sixes. There wouldn’t have been the same clamour for changes in personnel or critique of Ireland’s performance.

Of course, that’s a big ‘if’, and there were shortcomings. Uppermost amongst these were three lost lineouts including one costly one early on. Handling errors punctuated the performance, and those by Tadhg Furlong and Sean O’Brien in either half eventually led to Sexton’s sin-binning and the ensuing three-pointer, and George North’s second try.

A return of only three points from over 60 per cent possession and territory in the second half is also a poor return. This wasn’t so much due to a preponderance of one-off runners – a ploy mostly used when reduced to 14 men and which, ironically, came unstuck when O’Brien, as first receiver, opted to pass and did so behind Jamie Heaslip.

Promoting Peter O’Mahony would give the Irish lineout another high-class operator, offensively and defensively. However, with O’Brien the only recognised ‘7’, this would either be at the expense of Stander or Heaslip.

Stander has been immense, and carried another 15 times for 47 metres on Friday night, albeit about half of those were from that one early carry. As with Murray, especially in the way they sought the scrum-half out immediately after his injury, and Sexton, Stander was otherwise targeted to good effect.

At one point he was driven back by the entire Welsh back-row, and twice more by the combination of Sam Warburton and Justin Tipuric, who made 41 tackles between them. O’Brien was credited with a gain of just six metres from 12 carries, but a litany of Welsh players had negligible return from their carries too. It was that kind of gain-line warfare.

Stander could be shifted to number eight at the expense of Heaslip, but he has been having a fine campaign and again had a high tackle count. He’s a hugely influential, experienced cog in this Irish team. Yes, he dropped two balls, but that almost certainly means he won’t drop any this Saturday. Drop Heaslip against England? Nah.

If Stander were to make way for O’Mahony, that would give Ireland another lineout option, although it would forsake Stander’s carrying, until the last 20 or 30 minutes anyway. Ireland will need to match England’s considerable impact off the bench, and both Cian Healy and Iain Henderson fit that bill. Besides, Donnacha Ryan had a fine game, with a couple of dynamic carries to go with his usual grunt.

It’s true that Sexton tried everything he could and almost everything went through him. To ease his attacking load, thus providing an experienced voice outside, there’s a stronger argument for reinstating Jared Payne.

This could be at the expense of Garry Ringrose, who has a huge future regardless, or Rob Kearney, whose superb aerial skills dragged Ireland back into Friday’s encounter and are important to Ireland’s game, no less so than against England. That said these options are partially based on how Kearney’s body, which has had its share of woes this season, is holding up.

Thus, and while this might not be popular, there’s an argument for keeping changes to the starting XV to just one or maybe two. Remember that Rob Howley and the Welsh coaches resisted the clamour for change from all manner of ex-players and the Welsh media, and were pilloried for not doing so. Howley and co were thoroughly vindicated.

A good side doesn’t suddenly become a bad one, and a dozen of last Friday’s Irish XV did start the famous win in Chicago.