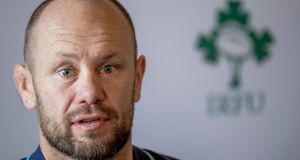 Ireland scrum coach Greg Feek on last week’s defeat to Wales: “There were a few errors but that’s probably due to what Wales did, and a little bit maybe us trying a bit too much.” Photograph: Morgan Treacy/Inpho

This Irish squad had elevated expectations on the back of the 2016 wins over South Africa, New Zealand and Australia, and so viewed in that light they have come up short in this, as yet, undistinguished Six Nations campaign, disappointing themselves as much as their supporters.

A dozen of last Friday’s starting team in Cardiff were in the team which kicked off the historic win over the All Blacks in Chicago, yet players and coaches alike remain convinced the difference in performances can still be measured in fine margins.

Indeed, scrum coach Greg Feek on Tuesday went so far as to state: “I thought last week was pretty good. There were a few errors but that’s probably due to what Wales did, and a little bit maybe us trying a bit too much.

“In November we capitalised on those field positions, and securing those positions, and getting a bit of continuity and applying that pressure. And this time we just slipped up on a couple of those moments which led to the whole thing unravelling a little bit.

“But we still back what we’re doing. We still back the players. We still back our structures. If we’ve put in a couple of new things as well that are growing us from what is happening then we’ll do that. But at the moment, I’m not saying we’re not disappointed with where we’re sitting at the table, and the couple of losses that we’ve had, but there are some really good positive aspects which have come out of it.”

Having joined Leinster as scrum coach under Joe Schmidt in 2010, the former All Blacks prop is now in his sixth season with the Irish team. He also has a vested interest in helping to prevent England eclipsing the All Blacks’s 18-match winning run this Saturday.

“Since I have been involved, there is just something different, a different feel to a lot of other games, particularly in Dublin,” said Feek. “Being a Kiwi it has always been a rivalry as well, similar to the Irish in some ways, and they [England] have always been a threat, always had huge player depth, good set-pieces, and that’s probably the area what brought me to Europe in the first place; those set-piece battles and what you can learn from it.”

There’s sure to be a hell of a set-piece battle on Saturday, not least in his area of expertise. “They’ve got a huge back five and a massively experienced frontrow. It doesn’t matter who they have at number eight. It looks like they’re really fired up to scrum. I’ve got a lot of respect for what they do. They’ve had a change in coach, with Neal [Hatley] coming in, and they can play quickly off it and they can scrum for a penalty, so it’s probably going to be our biggest challenge so far.”

The same will assuredly be true for the Irish defence as well, judging by the new heights which the English attack reached at Twickenham last Saturday in filleting Scotland, notably with the quality of their handling, running lines and array of strike moves.

Typical of the Irish management’s comparatively low-key approach in match week, and in stark contrast to Eddie Jones, Ireland’s ex-England defence coach Andy Farrell will not be speaking to the media this week. This is, in part, no doubt due to any questions about overseeing a defence which has to keep his son Owen – a hugely important cog in the English machine – under wraps.

“I questioned Andy myself actually,” said Feek with a smile. “I said to him ‘you should be doing this’ but obviously with his son playing that is probably why you are not [speaking to him]. I don’t want to start that whole thing either, I think someone else should, but part of me wants to start it because Andy is a character, he is a great coach and he has been a great fit for us.

“Part of me wants to be very professional but the other part of me wants to enjoy this moment of maybe capitalising on Andy and his involvement with us. The only thing I would say is that I respect what he is going through and it is not easy I suppose in some ways. I have had that discussion with him and I think he is handling it well.

“What gets you through any of this is purely your competitiveness in what you do at the end of the day, you know. He will do his job and Owen will do his. I have never met Owen. I can’t really speak for him but I know Andy is being as professional as he has always been this week. Nothing changes and he has been delivering great messages about playing and being chirpy over a flat white [coffee] well.”

As for Schmidt, he will be feeling the disappointment of this campaign more acutely than anybody, and will now be feeling the pressure that comes with securing a top-half finish and with it a top-four ranking for the World Cup draw.

“Joe is a workaholic, and that doesn’t change. He’s a good communicator, that hasn’t changed, and his belief in what the players can do just as individuals, his staff and himself, hasn’t changed. These weeks just keep going.”

“It’s just been head down, back to business, and Joe’s honest. You’ve all heard of his video sessions. If we won or lost, those things don’t change either because if we had won at the weekend, you guys might have been saying ‘maybe you guys are over-confident now’. So he’s not going to change after one [loss] either.”