Stade Francais players go on strike over merger with Racing 92 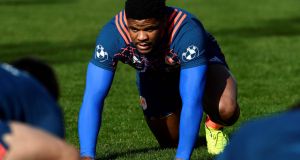 France’s Jonathan Danty: “We really thought it was a joke, because it was unthinkable that such a thing should happen.” Photograph: Christophe Simon/AFP/Getty Images

Stade Francais rugby players have gone on strike over a planned merger with rival Parisian club Racing 92, the head of the players’ union told Reuters on Tuesday. “They’re on open-ended strike,” Robins Tchale-Watchou said in a text message.

France’s Six Nations players thought it was a prank when the two clubs announced they were to merge next season. And centre Jonathan Danty revealed it had already sparked a rebellion in the France camp.

Danty and wing Djibril Camara left the squad hotel on Monday, against the wishes of management, to meet with stunned Stade Francais team-mates at a Paris restaurant.

But the merger also puts jobs at risk, including those of players and coaches at both clubs, and it sent shock waves through the national team.

Danty said he had no forewarning of the announcement.

“In my bedroom, at around 11 o’clock, I read about it on my phone,” he said. “My first reaction was to go and see [France colleague] Henry [Chavancy] to ask him if it was a joke.

“After that we had a meeting between players from the two clubs. We gathered in a bedroom to talk about it. And we really thought it was a joke, because it was unthinkable that such a thing should happen. And even today it’s a bitter pill to swallow. It’s very bizarre.”

He added: “We’ve always been told we’re the club’s future. We’ve often heard that if we leave, the club dies. And then we find out what’s been done behind our backs.”

In an interview published on the L’Equipe website, Danty said strike action would not be ruled out.

“Yes and no, because if we strike, we would need the Racing players to do so as well,” he said.

“I had to be there. I’ll take the consequences of this trip to see my colleagues and supporters and to share in this moment of sadness with them,” Danty said.

“[The management] wasn’t very in favour, because we’re in full preparation for the final match of the Six Nations,” Danty said. “But we got a phone call from one of our team-mates who had received one from the vice-president of the federation [Serge Simon]. And he had given his agreement.”

Danty (24) has been with Stade Francais for a decade, and said he did not know whether he faced sanctions for attending the meeting, saying any such action would feel like “a double punishment”.

However, aware that would be a possibility, Danty told possible France starter Rabah Slimani to miss the meeting so as not to risk his place in the team to face Wales on Saturday.

Danty also said he did not know whether he would play for the merged club, despite having a year left on his Stade contract.

He added of his future: “It’s going to be complicated because I have to digest what’s been announced. That’s going to take some time.”