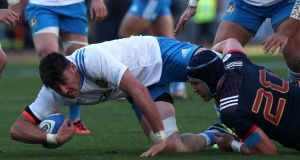 Scottish-born lock George Biagi has been named in the Italy side as one of four changes to Conor O’Shea’s starting line-up for the Azzurri’s final 2017 Six Nations match at Murrayfield.

The 31-year-old 6ft 6in Zebre player, who came off the bench in defeats to Ireland, England and France, has been selected in the second row to face Scotland in place of club team-mate Dries van Schalkwyk.

Zebre’s Maxime Mbanda is also named in the starting pack, in place of Glasgow flanker Simone Favaro, while Ornel Gega takes over from Leonardo Ghiraldini at hooker after recovering from a neck problem.

Tommaso Benvenuti replaces the injured Michele Campagnaro in the centres, and back-rower Federico Ruzza will be hoping for a first senior cap from the bench.