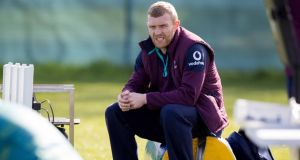 Keith Earls sat out Ireland training with what was described as a “bit of tightness” in his groin at Carton House on Tuesday morning, having also missed the previous day’s session.

The initial prognosis is that it shouldn’t preclude him from selection, when the team to play England at the Aviva stadium, is announced on Thursday lunchtime.

However Ireland coach Joe Schmidt has a well-documented preference for his players to train fully in the build-up to the match but there are exceptions to the rule.

Ireland scrum coach Greg Feek confirmed that Jonathan Sexton (head/face) and Conor Murray (shoulder) took a full part in the session. “Johnny and Conor trained today, they were pretty good, so they got through it. Earlsy will train on Thursday.

“He just has still got a bit of tightness there and the same with Tommy O’Donnell, he’s got a bit of a tight quad, bruise, so he’ll be back on Thursday as well.”

The post-game Wales review centred on shortcomings in several aspects of the performance in the defeat to Wales. Feek explained: “You don’t have to be a rocket scientist to work out that you have to make the most of the opportunities (presented).

“You’ll have heard fine margins mentioned a lot. We certainly had opportunities and you really have to take them at this level. One thing we can’t fault is the work-rate and the endeavour of our guys. There was 46-minutes of ball in play which is a huge amount; the average is about 36, 37 of 38 minutes and they (the Irish players) were still going at the end.

“We’ll take some positives and constructive things out of it and hopefully make that work for us this week.”

So how do Ireland stop England? Feek paid tribute to their run of 18 victories in succession, the calibre of their players and an ability to crate and exploit space before delving a little deeper. “Their game awareness is sharp whether it’s space or mismatches and we just need to make sure we get the basics right on defence and on attack, we secure our possession first and foremost.

“Rugby at Test level is all about pressure so you want to try to create that and not put it on yourselves. So all those things come into play and we’re under no illusions, as a coaching group particularly, that it’s going to be a tough test but we can be proud of what we’ve achieved so far with the endeavour and work ethic of our guys so far.

“”It’s like any team, if you can upset any part of their launch-plays, through the first few phases, things like that. If you can put pressure on with your defence, if you get some continuity in how you play, so you can hold on to the ball and use our plays to create options, whether it’s close or out wide.

“I think if we come in too prescriptive we might be undone as well. We’ve just got to keep alive and take those opportunities when we get them and don’t give them theirs, I suppose, without going into too much detail.

Lewis Hamilton the fastest in Austria Grand Prix practice 12:27
Ole Gunnar Solskjaer: ‘The sky’s the limit’ for Mason Greenwood 12:07
Monica Seles: The warrior queen who could have been the best ever 11:25
Thrillingly fluent, thrillingly pointless: Man City’s riposte comes too late 08:54
World Athletics freezes out Russian athletes after $5m fine goes unpaid 08:41
Crossword Get access to over 6,000 interactive crosswords