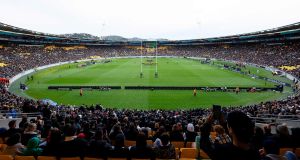 New Zealand Rugby is expecting a “near-capacity” crowd of some 47,000 to pack into Auckland’s Eden Park for the second Bledisloe Cup international against Australia on Sunday.

Pictures of 31,000 fans without masks cheering on the three-times world champions in the first Test in Wellington last weekend attracted plenty of attention on social media.

The envy from fans in countries where sport continues to be played in empty stadiums will only be exacerbated on Sunday when the All Blacks return to their spiritual home, where they are unbeaten in 43 matches going back to 1994.

The bumper crowds are possible because of New Zealand’s relative success in combating Covid-19, having appeared to have stamped out community transmission of the novel coronavirus earlier this year following a tough nationwide lockdown.

A renewed outbreak in Auckland in August was also brought under control with fresh lockdown measures and NZR said on Tuesday that 40,000 tickets for Sunday’s match in the city had already been snapped up.

“It was fantastic to see so many fans come together in Wellington for [our] first Test in more than a year, and after such an enthralling contest interest has gone to another level,” NZR’s Chris Lendrum said in a statement.

“We are now looking forward to bringing Test rugby to New Zealand’s largest city and with more than 40,000 tickets sold it’s shaping as a special occasion.”

Sunday’s enthralling 16-16 draw was the first rugby union Test after a seven-month hiatus caused by the pandemic but fans down under have plenty more to look forward to over the next couple of months.

The Rugby Championship, which involves the trans-Tasman Sea rivals as well as world champions South Africa and Argentina, will be hosted in Australia starting with the third Bledisloe Cup Test at Sydney’s Olympic Stadium on October 31st.

The government of the state of New South Wales, where community transmission has been reduced to a handful of cases each day, loosened restrictions on big stadiums from October 1st to allow them to be filled to 50 per cent of capacity.

That means the three Tests played at the Olympic Stadium could be played in front of crowds of 40,000, while the Western Sydney Stadium will be able to welcome 15,000 fans to the four matches it stages.

All Blacks scrumhalf Aaron Smith, meanwhile, gave a scathing assessment of his performance in last weekend’s match as New Zealand continued to pick at the scabs of the 16-16 draw. Smith was not alone in offering his analysis of what went wrong for the three-times world champions, with the local media offering another ream of copy on where Ian Foster’s side fell short and how it could be fixed.

Few were as harsh on Smith as the 93-times capped player was on himself, however, especially when he compared his display in Wellington with that of his opposite number, Australia’s Nic White.

“My own standard wasn’t up to it,” he told reporters after landing in Auckland for Sunday’s second Test. “My passing was erratic, inaccurate and really set us up. It gave them shots at [outhalf] Richie Mo’unga, it didn’t give our forwards opportunities to run on to the ball . . . things I take pride in I need to sharpen up.

“Nic White had a field day. He was able to attack our [defence], he set up a couple of tries, he kicked well. Having that impact on a game is something I like to do. I just want to always keep pushing myself to another level of my performance and it wasn’t good enough at the weekend.”

That the Wallabies can expect a backlash on Sunday is a given, especially as the match takes place at Eden Park where the All Blacks last lost to Australia in 1986.

Hooker Dane Coles, who came off the bench in Wellington, said the pack also had plenty to prove in front of a big crowd.

“When you see clips with their intent and smashing guys at the ruck and us just parking up and having a holiday . . . that’s personal pride stuff,” he said. “The beauty of rugby is we’ve got a chance to fix that and make it right.”