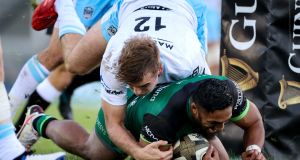 Connacht will hope it is a sign that for the first time since winning the PRO12 title, they broke a six-game losing run to Glasgow Warriors in this season’s opener at the Galway Sportsground.

Despite an “ill-disciplined” opening half in which Connacht fell 7-3 behind, they produced three tries and another two penalties in a high octane second period to secure an all-important home win and a “monkey off the back” on the Pro14’s opening weekend.

It was a game in which the honours could have gone either way. Danny Wilson’s charges were never out of sight, but the home side’s ability to keep the ball alive, work hard for each other, and produce enterprising rugby was ultimately rewarded.

Connacht coach Andy Friend says the difference between the first and second halves is a “great lesson for us early on in the season”.

“The biggest discussion at half time was that we were beating ourselves and we had to control our discipline. We conceded nine penalties in the first half and one in the second half. There’s the difference between the first and second half because our pressure does hurt teams.”

Added to the doggedness of the pack, led by man of the match and captain Jarrad Butler, and the duel composure of Jack Carty and the always energetic Kieran Marmion, Connacht proved their prowess out wide. The new-look back three found their speed in the second half to play a vital role, alongside midfielders Tom Farrell and Bundee Aki. Aki once again supplied the energy and the voice as Connacht gained momentum, and was the finisher for two superb tries.

“Bundee’s energy out there was brilliant. I thought our nine and 10 controlled the game really, really well in the second half and we started to play a bit more rugby. We work a lot on transition in training and a couple of those tries came from really good transition so we’re happy with that.”

His new-look back three of wings Alex Wootton and Peter Sullivan, and fullback John Porch, who had all featured in their 26-20 win over Ulster in the August fixture at the Aviva, also delivered.

“They are very different,” says Friend. “Alex never dies with the football, a couple of beautiful kick-throughs today, he keeps that ball alive; Pete Sullivan is a big big man and he’s got a lot of presence around his game; Johnny Porch has gas, he sees space, and again he brings real punch and energy, so the three collectively make up a neat package. It is the second time I’ve seen it and the second time I’ve liked it.”

With Ulster leading 10-3 after an Adam Hasting’s penalty, Connacht produced the first of their three tries. Wootton produced the perfect kick ahead, and while right Peter O’Sullivan did well to track down the line, but lost possession, it set up field position. Tom Farrell was instrumental in breaking the defensive line before releasing to Aki who crossed.

Carty’s conversion levelled matters, and with the momentum, Connacht’s passes started to stick – both wings exploiting space to set up field position. Once again Porch and Aki were involved in the build-up, along with hooker Dave Heffernan and Butler, who supplied Quinn Roux to finish under the posts. Carty’s conversion put the home side into a 17-10 lead.

But in the nature of this see-sawing match, Glasgow struck immediately with a converted try when Hew Jones found a gap to score and Hastings added the extras to level again.

However Connacht were not finished. After a Carty penalty, Porch, showing electric speed and aided again by Wootton, set up field position for Aki to bag his second. Although Glasgow countered with a try from Seymour to come within a point, a poised Carty slotted a penalty from the 10m line which was enough to secure an opening day victory.