The Australian newspaper published allegations of drug use and domestic violence 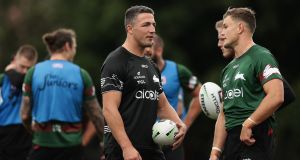 Burgess confirmed he had stood down from his coaching role with Souths ahead of their elimination final this weekend after The Australian newspaper on Friday published detailed allegations of drug use and domestic violence levelled at him.

The report included claims that the club allegedly attempted to cover up the misconduct.

Burgess has also pulled out of his broadcasting duties with Fox Sports but the NRL will not enforce any stand-down measures itself in light of the allegations until it has “the information needed to do that”.

The NRL’s chief executive, Andrew Abdo, said the league’s integrity unit would speak to South Sydney officials on Friday and would cooperate with police investigators.

“These allegations are very serious and I’ve instructed the integrity unit to investigate the claims as a priority. We will also seek the advice of police and other relevant authorities throughout this process,” Abdo said.

“This is new information for the NRL and it is important we now gather the facts. The allegations have not yet been tested and due process will be followed as we undertake a thorough investigation.

“There is no place in our game for violence, harassment or abuse against women. If anyone is found guilty of these allegations we will take the strongest possible action.”

“The allegations are false and constitute an indefensible defamation against my client,” the paper quoted O’Brien as saying.

Speaking at a press conference on Friday afternoon, Abdo insisted the NRL had been blindsided by the report and had no prior knowledge of the allegations.

“It’s important to emphasise that this is new information,” Abdo said.

“Now that we have this information, we will act on it and make sure that we follow through, get to the bottom of the facts, get all the information and take the action that’s necessary.

“We will conduct a thorough investigation. And if information has been withheld by parties we will take the appropriate action.”

The chairman of the ARL Commission, Peter V’landys, also said the NRL was unaware of the allegations against Burgess and Souths until Friday.

“It would be totally inappropriate to comment on this specific case. I don’t have sufficient facts. Like anyone else in the community, you have to provide due process and natural justice and Sam should be afforded that,” V’landys told Sydney radio 2GB.

“But in this instance, I think that the appropriate action is to investigate it, get all the facts, and make a judgment after that.

“Once we have all that information, all the facts, and everybody’s version we will make the appropriate decisions.”

A NSW police spokesperson confirmed it had received a report “outlining various allegations relating to the conduct of a 31-year-old man”.

“Police have commenced inquiries, however as these inquiries are in their infancy there will be no further comment made at this time,” the spokesperson said.

Our Watch, the anti-domestic violence campaigners, said it commended the NRL’s zero-tolerance policy on violence against women.

“There is no place for discrimination, disrespect, and violence against women in sport or society more broadly,” the group’s chief executive, Patty Kinnersly, said.

“Leadership from Australia’s national sporting codes is incredibly important because it sends a message to everyone involved with the organisation. Sport has the potential to play a powerful role in changing attitudes.”

Burgess called time on his playing career at the end of last season after two stints with the Rabbitohs, during which he inspired the team to the 2014 NRL premiership when he famously played on with a fractured cheekbone in the grand final.

He then spent a year away from rugby league, playing union for Bath Rugby and appearing at the 2015 World Cup with England, before returning to Sydney and the Rabbitohs for the start of the 2016 season.

He signed a four-year extension to his contract in 2018, but a chronic shoulder problem ended his career earlier than expected, although he stepped into the role of assistant coach at South Sydney.

Matt Williams: Scrum stoppages turning rugby into a boring spectacle 06:30
Ireland retirement was ‘hardest decision’ for David McGoldrick 06:30
Evergreen: Johnny Sexton the latest Ireland outhalf to keep on keeping on 06:00
Disappointing Nations Cup set for a finale of ‘farce’ 06:00
Michael Dempsey: Teams probably in better shape than ever this year 06:00
Crossword Get access to over 6,000 interactive crosswords