Owen Doyle: Wales lucky to escape heavier censure for a litany of offences 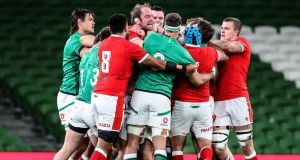 Alun Wyn Jones had demanded a Welsh win and his team were fully “up” for their visit to Dublin on Friday evening.

The passionate singing of Land of our Fathers always raises the hairs on the back of the neck, and in a sadly empty, soulless Aviva Stadium it did so once more.

Unhappily Wales continued their woeful form and, for one of the proudest rugby nations on the planet, it is surely getting very hard to take.

Early on, it was clear that they would not be intimidated and intended to bring the game to Ireland. Both Jones and Liam Williams were involved, fracas-wise, with James Lowe and, absolutely unsurprisingly, Peter O’Mahony.

When that warrior finally hangs up his boots, it will take but a cursory examination to show that those boots never took a backward step.

Referee Mathieu Raynal sorted out these early skirmishes in typical fashion. He appears so laid back that one day he might topple over; and I would prefer him to have a change of tone available in his repertoire to help get his message across, and to reduce the rising penalty count.

The scrums were a very interesting facet of play and it is to Raynal’s credit that he did not reset the early ones, and, quite rightly penalised the Welsh prop, Rhys Carre, on their own put-in, twice. The problem was that Carre was simply not up to the job and that presents a real difficulty for any referee.

Andrew Porter then seemed to hoodwink him, and Ireland benefitted with another penalty. This was balanced by a penalty against Ireland’s scrum which I’m sure will be queried.

On the other side of the scrum Wales were more secure, with Tomas Francis putting in a decent stint against Cian Healy. Late in the match Raynal was overly sympathetic in this area, and I saw little point in him talking to the front rows as the clock wound down.

The overall number of penalties (18 against Wales in a total of 31) should probably have seen a yellow card, or at least a firm warning. And, indeed, several subtle but effective destabilising side entries went unpunished.

The four French match officials are so good at English, and communicated easily and fluently with each other in what is a foreign language for them, to the benefit of both the players and the viewers.

Wales had no platform anywhere and the result was never in doubt, it was just a question of by ‘how much?’ Ireland can be pleased, but we will know a lot more about where the team is come dusk next Saturday.

Over to Florence where Italy put up their best performance for some time before they folded in the final quarter.

From an officiating point of view decisions were largely accurate, and that is fully acknowledged and appreciated. But we were treated to an unnecessary side-show by Wayne Barnes in the TMO booth, and referee Luke Pearce.

The latter exuding a false bonhomie, and both forgetting that nobody but nobody, apart perhaps from their nearest and dearest, had tuned in to watch them. Oh, for the days of those excellent and unassuming Englishmen Ed Morrison and Chris White.

When Scottish hooker George Turner went over to score, it was spot on for the officials to check the grounding. From the second TV-angle shown it was absolutely clearly a try.

But the TMO needed to stay involved, and demonstrate his new toy, which involves moving the picture backwards and forwards, informing us that – “I’ll just rock and roll it for you.” For goodness sake.

Italian Tomaso Allen, having earlier cut his knee when colliding with the advertising hoarding, limped off with minutes to go. With the claret streaming down the player’s leg, Pearce made an unnecessary meal of it all – insisting that the Italian doctor confirm that it was a “blood injury,” enabling a replacement to come on. The doctor immediately confirmed the bleeding obvious, and was never going to say anything else. Even if, maybe, it was a different injury which prevented Allen from continuing.

Nigel Owens’ 99th Test match was a non-event as Georgia were overwhelmed by England at Twickenham. The scrums presented a major challenge, and confirmed again that these issues are driven mainly by the attitude of teams and coaches. A week previously Owens had handled the Ulster v Glasgow match – scrums perfect. It is another problem requiring the urgent attention of World Rugby.

For those who had set their alarms for well before the crack of dawn and rose to watch Argentina play New Zealand, they were fully rewarded. In a performance of great quality, control, and passion in spades, the Pumas pretty much dismantled the All Blacks for a first ever victory. It’s not often you see the All Blacks getting an injury-time consolation try.

Even with a small crowd of about 10,000 the atmosphere was electric, and showed how badly the game needs crowds to attend, and not just for the money.

The ‘Blacks’ had spent a lot of the match appealing for penalties, yellow cards and taunting the opposition. Dane Coles had a penalty reversed for a slap to the face of Rodrigo Bruni. Coles was fortunate that referee Angus Gardner didn’t give him a 10 minute rest.

Even more fortunate was Shannon Frizell for a similar, but harder, strike on Marcos Kymer. So, there will be a hard look at discipline in the NZ camp. With recent Wallaby coach Michael Cheika now assisting the wonderful Mario Ledesma, the prospect of Australia versus Argentina next weekend is a truly mouthwatering prospect.