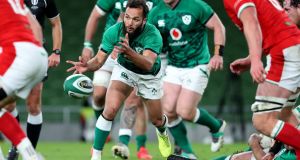 Jamison Gibson-Park flashes the ball wide for Ireland against Wales at the Aviva. Photograph: Inpho

Eddie Jones doesn’t tend to dole out compliments to opposition coaches, at any rate not unless they are of the slightly barbed variety. However, he wasn’t gilding the lily when he looked ahead to next Saturday’s third meeting and observed: “Andy has made their attack a little bit unpredictable.”

Given how Ireland have fared on the last two Twickenham visits, that’s no bad thing. Add England’s damaging 32-20 win at the Aviva Stadium in the 2019 Six Nations after Ireland had won 18 of their previous 19 tests, and the aggregate score from the last three meetings is 113-47 and 15 tries to six.

Ireland have some demons to exorcise next Saturday and bringing more of an unpredictable attack – admittedly on the basis of the kind of strong set-pieces and physicality in the collisions witnessed against Wales – would be a help.

True, like Ireland in 2019, Wales in 2020 provides further proof that it’s damned hard for a Celtic nation to climb the mountain top – but it’s even harder to stay there. In part, this is because opponents start taking you more seriously.

Even so, there were perhaps the clearest signs yet of the subtleties Farrell, Mike Catt and company are bringing to this Irish team while retaining the best aspects of the Joe Schmidt template.

On RTÉ, Jamie Heaslip spoke of Ireland “changing the picture the whole time” and there was perhaps more evidence of this in a first half where they outscored Wales by 16-6 than in the second, which they won 16-3.

Instead of invariably trucking it up, the first receiver, or middle man in a three-man attacking pod of forwards, often pulled the ball back for one of the playmakers to put width on the attack. Alternatively, Johnny Sexton or one of his replacements at outhalf, Billy Burns or Conor Murray, saw the Welsh blitz and tipped the ball back inside for a forward such as Andrew Porter to take an angled line.

In this the Irish think tank had clearly done their homework, for two of France’s tries against Wales had emanated from attacking the inside shoulder of the first shooter, albeit more by dint of footwork. Indeed, one of the most striking features of last Friday’s game was how smarter the Irish coaches had been in selection and tactics.

Admittedly, it wasn’t as if Ireland didn’t have inventive strike plays under Schmidt. Think Tadhg Furlong’s pirouette at Twickenham in 2018 and Bundee Aki putting CJ Stander over. Cian Healy pulling the ball back for Conor Murray to hit Sexton behind Jordan Larmour’s decoy run in the opening Six Nations win over Scotland last February is still hailed as an example of Catt’s influence. In fact, it was a move practiced in training which actually pre-dated the World Cup.

Even so, there was a variation on this as early as the sixth minute last Friday night after Chris Farrell had trucked up Ireland’s first attacking lineout. Caelan Doris, who brought power and subtlety to his game, came hard on to the ball but pirouetted to hit Jamieson Gibson-Park on the wraparound. This created the space for Sexton to make the game’s first line break before opting to skip pass to James Lowe.

Lowe didn’t hold on to the ball, but his understanding with Gibson-Park helped bring him plenty of early involvements as he was brought in off his wing akin to Leinster strike plays, that is, the pack setting up a drive before Josh van der Flier passed infield to Gibson-Park, who skipped Ronan Kelleher on his inside to send Lowe through the gap.

Demonstrating what he can bring to Ireland’s attacking game as well as that left boot, Lowe beat the first man, in this instance Liam Williams, as he does, and then freed his hands, as he does, to offload inside for Sexton arriving at full tilt.

In all of this, Gibson-Park set a high tempo right from the off, so stymieing the Welsh blitz and giving Irish carriers soft shoulders to attack. He made one or two wrong options, but so be it.

Gibson-Park also chose the right moments to snipe. After Porter’s carry from Sexton’s inside pass, Gibson-Park quickly scooped up the ruck ball and attacked the blind side, doing enough to draw in a second player, Dan Biggar, for Sexton – again running hard onto the ball – to charge onto the short pass.

Revealingly, Sexton’s disappointment emanated from how much he was “enjoying” himself and the pity is that Ireland have lost their experienced captain and world-class outhalf for their most important game of this autumnal window.

Burns showed a willingness to attack the gain line and spin skip passes off either hand to both wingers, once after Chris Farrell provided the unexpected pull back, before Ireland had issues recycling their own ruck ball in the third quarter.

With the bench adding real energy, especially in defence, Ireland regained control in the last quarter and maintained their attacking shape and variety.

Finally there was the route one approach when Doris steamed off the base and perfectly timed his pass for the charging Lowe. Tellingly, Doris, Farrell, Connors, Murray, Tadhg Beirne, Gibson-Park, Byrne and Peter O’Mahony (who let everyone one know he’s not going anywhere) all immediately submerged the naturalized Kiwi.

The big one is next Saturday but Ireland’s game is evolving.