Billy Burns on facing England: ‘how conflicted will I feel? Not at all’

‘I don’t want to just be in for one game, I want to get back in that squad and play regularly’ 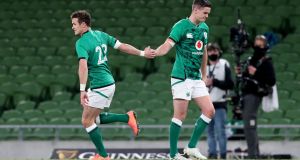 Billy Burns does not want to be a one hit wonder. The English born outhalf, who came on against Wales as Johnny Sexton hobbled off is following Return to Play protocols but has his eye on running out against the country he represented at underage level.

With Sexton (hamstring) and Robbie Henshaw (abductor) officially ruled out for the weekend clash with England in Twickenham, Burns may see his wishes granted, although Ross Byrne may quibble. It may be a pale imitation of a full Twickenham but the 26-year-old seems to be on the right track to play at the weekend.

“Like I said, I don’t want to just be in for one game,” says Burns. “I want to get back in that squad and play regularly. There is plenty to improve on.

“How conflicted will I feel? Not at all,” he adds. “I’m very much here to play for Ireland. My passion is to play for Ireland. I loved representing Ireland at the weekend. I’m fully focused on, if I do get the opportunity and everything goes well with return to play, it’s all about getting the win for us. It doesn’t matter whether we’re playing England or New Zealand or whoever.”

Burns’ brother Freddie has also played for England at Test level. In a household in which he has three brothers the text messages have been flying. Burns grandfather was from Cork, which qualifies him to play despite previous success with the England Under 18 side. He was part of the team that won a European Championships 25-13, scoring seven points in the final against Ireland.

“I’ve got three older brothers and we’re all very tight so there’s plenty of messages before the game,” he said. “I was actually pretty calm going into the game. But every time I got a message from one of them, it was the thing that made me most nervous because you don’t want to let those guys down.

“It was a hugely proud moment not just myself but for my family and all the people who have helped to get to this stage. Like I said, I don’t want to just be in for one game, I want to get back in that squad and play regularly. There is plenty to improve on but there was a huge amount of pride for myself and my family.”

The week of recovery has been going well. Burns came off with a head injury before the end forcing a reshuffle among the halfbacks with Conor Murray coming in on the 62nd minute, Sexton already receiving treatment.

For coach Andy Farrell it became a game of forced options, losing two outhalves and Murray finishing at 10 with the impressive Gibson-Park at scrumhalf.

“It’s not the circumstances you want to go on in with Johnny pulling up with the injury,” he says. “But it was probably the best thing for me because it just chucked me in at the deep end. Going into the game, I was thinking I’d be over the moon to get 20 minutes. But to get on at 30 minutes was huge.

“After the game it was all a bit of a blur. Obviously, emotions were high. It all happened so quickly. Obviously, I was devastated to go off the way I did but I guess those things happen.

“There were parts I was pleased with but, again, watching it back and reviewing it with coaches and the other players, there are definitely areas I can improve on. Now it’s about taking that next step having tasted it.”

A waiting game now for the match of his life.