Maro Itoje: We celebrate key moments for ourselves not the opposition 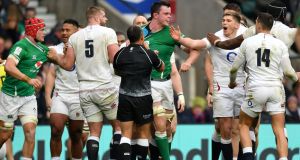 Not in our game, mate. Not part of our values, old chap. Not unless you are England or Sarries. Then it is fine to lord it over your opponent. Or roar in his face.

Nigel Owens, look away now. Maro Itoje was asked this week about all the whooping and hollering that has become synonymous with Saracens and England packs whenever they win a turnover or a coin toss or any minuscule battle that feeds into their physical and psychological fracturing of the opposition.

“I have a contrasting view to the premise of your question,” Itoje politely responded to the charge. “When there is a celebration of a small moment or small victory within the game it almost always has nothing to do with the opposition.

“So, it actually has nothing to with the opposition. It is more about championing a value or behaviour that we respect as a team.”

Sorry, correction, they do not roar in one’s face. They are a good two inches away.

James Ryan is a calm soul but last February, as another grim Irish day unravelled at Twickenham, he lost his temper after being melted under the English scrum.

The pulverisation wasn’t what got to him. It was Ellis Genge wailing in his face. Ryan went for him. The English players, led by captain Owen Farrell, only got louder, feigning disgust as Itoje rewarded the Leicester prop with a hug.

“They do that quite a bit,” Ryan told The42 not long after the 24-12 defeat. “They are into that ‘energising’ thing. They do the same with Saracens – they’re very vocal, very loud. If one of them makes a hit, you definitely know about it even if you haven’t seen it because there might be five or six of them cheering each other on.”

Ryan’s naked aggression that day, his refusal to lose quietly, felt like the last piece in his jigsaw. Unfortunately, none of the other Irish forwards could summon the energy to support the enraged young lock as the English championed their values.

Residue from that beating, not to mention Dublin in 2019 and the 57-15 humiliation before the World Cup, suggests that matters will boil over this afternoon.

“If there is a scuffle and I am in the middle of it,” CJ Stander promised, “I know I am backed by the team and so is everyone else.”

England love to rough up Ireland. Going back to the monstrous police constables Wade Dooley and Dean Richards, followed by Martin Johnson and Lawrence Dallaglio, that’s how they conduct business at Twickenham.

Gordon D’Arcy warned this week about the danger of engaging in open thuggery with Itoje and this ferocious English pack. It is not how Ireland has historically won this fixture.

Andy Farrell must strategically outwit Eddie Jones, Matt Proudfoot and John Mitchell – the ultimate southern hemisphere coaching trio – if they are to have any chance of ending the losing streak. Still, the temptation to embrace rules of engagement that England always offer must be close to overwhelming. Especially for an Irish pack that was recently described as “softies” on prime time South African television.

Statistics can be shaped to fit almost any narrative, but the size differential is stark. You can see it but it also exists on paper. The English pack weighs in at 934kg to Ireland’s 918kg. All logic points to an 80-minute arm wrestle ending in another sound thumping.

Jones has labelled Ireland as the “number one poaching team in Europe” despite recent examples of his flankers, Sam Underhill and Tom Curry, dominating those split second scraps for the ball.

Billy Vunipola’s girth ensures the average weight of the English backrow (116kg) is significantly heavier than the Irish (109kg) with the arrival of Will Connors and Ben Earl, similar young opensides, expected to alter the game’s flow one way or the other.

The same applies to secondrow relief where Exeter’s Jonny Hill – all 6’9 and 134kg of him – is promoted for being the outstanding lock in the Champions Cup. Iain Henderson must cancel out Hill’s multiple threats and add value to the lineout when he comes in.

The frontrow battle is where a tight game could tilt in England’s favour. Even with Cian Healy’s 101 caps, Ireland give up 15 Test matches in experience to Mako Vunipola, Jamie George and Kyle Sinckler.

Quinn Roux has been retained ahead of Henderson as Ireland seeks to transfer their scrum dominance against Wales to Twickenham. This is such a live threat that Jones questioned the ability of French referee Pascal Gauzere to know which scrum is in the ascendancy, while also raising concerns about the legality of Andrew Porter’s technique.

Even if Porter handles the sternest examination of his career, locked between Vunipola and George, and Sinckler is unable to overpower Healy, the re-enforcements must be a major concern for Ireland.

Injuries to Tadhg Furlong and Dave Kilcoyne have weakened Irish propping stocks with the international credentials of Ed Byrne and Finlay Bealham set to come under enormous strain from Genge and Will Stuart in the last quarter of this contest.

The English reserve forwards are on average 10 kilograms heavier at 598kg to the 550kg coming off the Irish bench.

Jones was cock a hoop in the aftermath of the torture inflicted by Joe Launchbury, Genge and Stuart on the Irish scrum and maul last February, comparing them to “NFL Special Teams”.

“That is the way the game is going.”

Hill is capable of having an even more devastating impact than Launchbury and we know Genge will repeat the same confrontational, yappy behaviour. How Ryan’s team responds to this guaranteed intimidation will colour the entire experience.