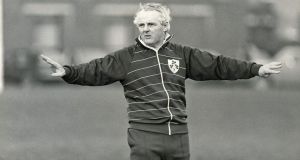 Tom Kiernan pictured in 1982 when he was coach of Ireland. Photograph: Billy Stickland/Inpho

First a brief rolling back of the years. At the time of his retirement in 1973 Tom Kiernan was Ireland’s most-capped player, most experienced captain and record scorer in international rugby with 158 points. In a career that spanned 13 years between 1960 to 1973, Kiernan earned 54 Irish caps.

The Irish fullback also captained the Lions on their 1968 tour to South Africa, when Mike Gibson became the first official replacement in rugby. Gibson made history that summer when he came on for the injured Barry John in the first Test match in Pretoria.

The first substitution in the Five Nations Championship would arrive the following year with Scotland invoking a new law. With it they brought on scrumhalf Ian McCrae when Gordon Connell retired injured with torn ankle ligaments in the first half.

The first tactical replacements were introduced in 1996, when three players were allowed, the changes all coming after many years when no substitutions were permitted at all, the days when the war horses played on with broken noses, mangled fingers and dislocations.

Of the 58 players who have won 100 caps or more with their countries, just two of them – David Campese, with 101 caps for Australia and Philippe Sella, with 111 for France, began their international careers in the 1980s.

No player that began their career prior to 1982, when Campese and Sella first started campaigning at international level, reached the century mark. The phenomenon of players earning 100 international caps is less than 40 years old.

In the same time period, 13 years, O’Gara won more than twice as many caps as Kiernan did. O’Connell also played internationally for 13 years with Hayes winning his tidy number in just 11 years.

The industrialisation of the game from part-time, amateur to paid professional, the changing of the rules to allow more players play in each game, the awarding of caps for all international matches and the packed schedule has come to create a new kind of Irish player, who will in time likely come to pack 100 international games into a 10-year stretch or less.

Six years ago the BBC ran an article on footballer Wayne Rooney. It asked if Rooney’s 100 caps for England was such a big deal anymore and pointed out that Dutch legend Johan Cruyff’s international career spanned 12 years in the 60s and 70s, the same length as Rooney’s career at the time. Cruyff played 48 times for his country.

At around the same time, Benfica’s celebrated forward Eusebio had a career that lasted 13 years. He won 64 caps for Portugal. Only four English players earned 100 caps in the last century – Billy Wright, Bobby Charlton, Bobby Moore and goalkeeper Peter Shilton.

Like football, rugby has dramatically changed and in Kiernan’s time, there was no Rugby World Cup, there was no regular summer tour and there was no autumn series. In 1968 Ireland played five matches, while in 2018 they played in 12.

There was a Five Nations not a Six Nations Championship, which over 13 years was 13 matches and there were, up until 1969, just 15 players per team. Now 23 players can play in each game. Tactical replacements, not substitutes.

In the amateur era in Ireland other inconveniences also collided with the cap building exercise. Tony O’Reilly lined out for Ireland between 1955 and 1970, a 15-year career which earned him a paltry 29 caps.

A stunning player O’Reilly debuted for Ireland at 18-years-old in 1955.  But he only scored four tries in total, against France twice, Scotland, and Wales and later quipped that he scored more tries than he got passes.

O’Reilly made his final appearance for Ireland in February 1970 after a six-year absence from the national team. He played against England as an 11th-hour replacement and denied Frank O’Driscoll, father of Brian, his only chance at a Test cap.

There are two points to be taken, the first that players had to work and many such as O’Reilly sacrificed collecting Irish caps for a successful business career that earned him tycoon status.

The second point, conventional thinking at the time but nothing short of racism, was that the IRFU didn’t hand out caps for playing against ‘non board member’ countries.

In 1970 Ireland went on a tour to Argentina to face, among others, the ‘non board member’ host country. Captained by Kiernan, Ireland lost both matches against Argentina with O’Driscoll playing inside centre in the two games. His efforts, like those of Kiernan and Willie John Mc Bride, went unrewarded with an official Irish cap. The first time the IRFU handed out caps for games against Argentina was in 1990.

There is probably an algorithm available somewhere that can convert 1960s or 1970s cap numbers into 2020 numbers. Then players like Kiernan could take their rightful place and players like O’Driscoll be given the caps they deserve.

So when Healy is deservingly clapped on to the pitch tomorrow in Paris for his 100th Irish appearance and Alun Wyn Jones with Wales and Lions caps passes Richie McCaw's record of 148, spare a thought for those players who went before and who never dreamed that getting to a century could be a career reality.