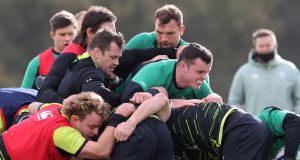 The Ireland pack train ahead of Saturday’s showdown in Paris. Photograph: Billy Stickland/Inpho

The 2020 Six Nations reaches a conclusion this weekend, and three teams are still in with a shout of being crowned champions heading into the final round of fixtures.

Ireland are the only side whose fate rests entirely in their own hands - if they beat France in Paris with a bonus point they will win the title, regardless of what happens elsewhere.

However, England remain favourites for the Championship. They play Italy in Rome on Saturday aiming to secure a bonus point win of their own, as well as putting as many points on the board as possible.

Whatever happens in Rome, Saturday’s finale in Paris is likely to be one to remember, as both sides look for the tries which could see them win the Six Nations.

Here is a look at what each side needs in order to be celebrating on Saturday night.

Ireland currently top the table on 14 points. They are the only side whose fate rests entirely in their own hands, and a bonus point win in Paris would give move them to 19 points and see them win the title.

If Ireland are beaten by France on Saturday, they can’t win the title. A draw could be enough for Ireland to finish top of the table providing England don’t win in Rome.

England are currently second in the table on 13 points and their job on Saturday is fairly straightforward - beat Italy with a bonus point, while racking up as many points as possible.

Eddie Jones’s side currently have a points difference of +15, inferior to Ireland’s (+38) but superior to France’s (+13). This means if England beat Italy with a bonus point they will be crowned champions if France beat Ireland - unless France secure a bonus point, while also beating Ireland by at least two points more than England beat Italy. That seems unlikely.

If England beat Italy without a bonus point then a regulation win in Paris would see Ireland crowned champions. If England and France match each other’s points haul then it will come down to points difference.

In the unlikely event England draw or are beaten in Rome, then Ireland and France would be in a straight shootout for the title.

Les Bleus perhaps need the most fortune in order to be crowned champions, and end their decade-long wait for a Six Nations title.

France are currently on 13 points in third place and need to match England’s result on Saturday, while also overturning a current points deficit of two. For example, if England were to beat Italy 40-0, France would need to beat Ireland by 42 points or more.

So, on the whole, England look the most likely champions.

1 Kevin McStay: Maybe a knockout All-Ireland Championship is the long-term solution?
2 Gerry Thornley: Ireland don’t want to box themselves into a corner
3 The Offload: Ireland are stuck in no man’s land
4 Klopp sings ‘multi-instrumentalist’ Firmino’s praises as Brazilian back on form
5 Nicky English: Galway and Waterford face battles with fatigue in All-Ireland semis
Real news has value SUBSCRIBE

Guardiola blames himself for Manchester City’s goal problems 22:31
Klopp sings ‘multi-instrumentalist’ Firmino’s praises as Brazilian back on form 22:30
Fernandes on the double as Manchester United get their revenge 22:17
Giroud’s late winner sees Chelsea into knockout stages 20:29
Irish racing hopes ‘game-changer’ vaccines will accelerate return of spectators 17:00
Crossword Get access to over 6,000 interactive crosswords