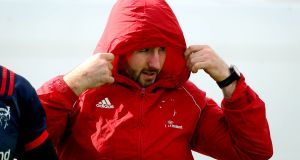 Munster prop James Cronin was handed a ban that was so meaningless as to be cynical for an anti-doping violation. Photograph: Inpho

A lifetime ago the boss pointed towards Dublin airport and barked ‘go.’ The simple instruction demanded a degree of impudence. Ask Michelle Smith, who was returning from a swimming event, if she had ever taken performance enhancing drugs (PEDs). A vexed question and a vexed reporter arrived to find a big nothing burger coming through the arrival gates.

Aer Lingus had kindly offered the celebrity back door. The question was never asked. Smith had never been sanctioned for testing positive for a PED and she never would.

But she found herself at the heart of suspicion on the basis of getting better and better over a three year period. Hers was one of the first times Irish people began to make up their minds based on the new criteria - whether it sat right or whether they believed in it or not.

Testing determined whether athletes were banned. For better or worse the public and media would judge them. Perceptions and opinion became currency.

Last week Munster and Ireland prop James Cronin became the centre of attention until Carlow footballer, Ray Walker, stepped into the spotlight. Cronin was handed a ban that was so meaningless as to be cynical for an anti-doping violation - “ineligible between April 15th to May 16th.” Suspended from the game for a month when the game itself was in shut down. Walker received four years.

Both Cronin and Walker claimed the banned substances were put into their systems in error.

For venerable Munster, the case of Cronin puts them in an uncomfortable position. He is the fourth player from the province to have become embroiled in a doping scandal, the third to have taken a banned substance while playing with the province.

In November 1998 an independent drugs tribunal produced a reprimand for the Irish Under-21 and Munster scrumhalf Tom Tierney. Tierney was seen to have made an unintentional mistake in using the banned stimulant Ephedrine prior to an Under-21 international match against France at La Roche Sur Yon in March of that year.

In 2003 the European Rugby Cup (ERC) announced that Frankie Sheahan’s ban had been reduced to three months and he was eligible to play once again. Sheahan argued that his dehydration playing against Toulouse in heat had given rise to higher levels of Salbutamol.

The ERC concluded it would be appropriate to exercise its discretion to reduce the two-year sanction imposed by the judicial tribunal. The hooker claimed he had forgotten to properly inform authorities that he was using a Ventolin inhaler to combat his asthma.

The South African lock’s mistake was in receiving a two-year ban after testing positive for the anabolic steroid drostanolone, effective until October 2016. After that he joined French club Racing 92 before Munster signed him on a one-year deal.

“Having said that everyone deserves a chance, can any of you look at yourselves and say ‘I’ve never made a poor decision in my life before?’,” repeated the IRFU. That line was not taken after Paddy Jackson and Stuart Olding were found innocent following a Belfast rape trial. But that’s a digression.

Munster? They flipped the message.

“Gerbrandt is an example to others, in particular our younger players, as to why you should not dope in sport - he nearly threw away his career because of a bad decision he made,” said the club. Others believed the issue crossed a line in moral hazard. Irish flanker Chris Henry was one of those.

“I just can’t understand,” said Henry at the time. “If foreign players have been caught doing that, it is hindering home-grown players who are doing it the right way. It took me until I was 24 to be physically ready to play.”

It was Steve Schmidt, a former Republican strategist and Donald Trump critic, who spoke about Trump’s dangerous views on taking disinfectant to counter Covid-19. Schmidt made a distinction, explaining that the Trump caricature is different from the narrative.

The president’s reckless freewheeling views on current issues of science and medicine had not just opened him up to humiliation as a latter day buffoon. More importantly it had given his adversaries a narrative.

UV light inside the body and disinfectant doing a tremendous number on the lungs was another gaff but on a growing list.

Schmidt’s observation could be applied to Munster. The danger is that they too have constructed a narrative stretching back to the 1990s. They have been involved a series of doping related issues that do not just stand alone as isolated incidents but can be construed as links in a sequence.

Sport Ireland are looking into the case of Cronin, who was given a wrong prescription by a pharmacy. Hopefully they will adopt a doubting Thomas attitude and ask to put their fingers in the wounds.

The wider picture is that Munster have inadvertently built a narrative around something of which they want no part. They are central to a history of rule breaking that has not been harshly punished. Cronin is a stunning example. Among Irish provinces, Munster are outliers.

From that people can draw their own conclusions as vexed reporters line up at Thomond Park to ask vexed questions.