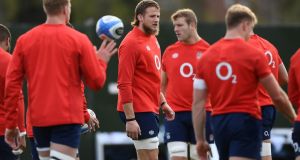 England have given a debut to Exeter lock Jonny Hill as they stage their final push for the 2020 Six Nations title against Italy on Saturday.

Hill packs down alongside Maro Itoje in the secondrow after an influential season at the Chiefs, who completed the double with the 26-year-old providing a physical presence and set-piece expertise.

Apart from Hill’s debut and George Furbank deputising for shin injury victim Elliot Daly at full-back, Eddie Jones has largely stuck to his tried and tested players in the starting XV.

England are currently second in the table on 13 points, ahead of France on points difference, with Ireland on top with 14 points. If Ireland fail to secure a bonus point win in Paris, five points from Rome will mean the 2020 Six Nations will be decided by points difference. Making England favourites as they face an Italian side who have already conceded 144 points over four defeats.