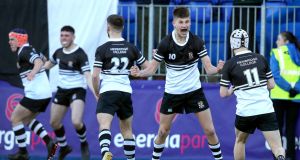 RTÉ’s World Report on Sunday morning took a story from Harare in Zimbabwe on the death of one of former President Mugabe’s generals Perrance Shiri, who passed away after contracting Covid-19. The report went on to explain that “judging from the pictures of mourners cars parked outside Shiri’s house, the well-connected still think they are invincible.”

So it was last week that a Green Party Senator, Vincent Martin, told the Seanad that Newbridge College and Clongowes Wood, the two teams that reached the final of this year’s Leinster Schools Senior Cup, should be allowed play the game and given the chance to “reach the promised land.”

This comes after the online petition back in March that demanded the Leinster Schools Cup finals to go ahead despite the British Open in golf, the French Open tennis, all of rugby and soon the Olympic Games getting postponed because of Covid-19.

“All four finalist teams and all those associated with their respective schools are disappointed and outraged....” went the original petition. “We, therefore, demand the finals to be played at some point in the future.”

One of the Taoiseach’s 11 nominees to the Seanad, Mr Martin pleaded with the IRFU saying that the cup final had been “ripped away from them” adding “is there any way at all the IRFU could give those people such a well-deserved day in the sun and have this all-Kildare derby. It’d be such a spectacle....there’s a window of opportunity for about one more month.”

Important matters and letters indeed being discussed and written in the upper house. It should be pointed out that a counter petition grew from the original one in March.

“Some clearly immature, self-important young men have demanded that a sports tournament be completed in order to boost their already inflated egos and to please daddy, no doubt,” it said. No comment.

“Not a good use of limited resources.” An unnamed health economist from Swansea University commenting on the UK spending of £166m (€185 million) on only 46 patients. Buildings, including The Principality Stadium in Wales and theatres, were turned into 17 hospitals at the peak of the crisis. But only the Dragon’s Heart Hospital in Cardiff received any patients.

0: Number of Covid positive tests recorded in the four provinces. You don’t normally want to be on the side that ends in nil but given where we are and what is going on in this country, it is probably the most encouraging zero the IRFU have ever had.

According to reports from South Africa not all in the southern hemisphere are happy with the increasingly likely prospect of South African teams competing in Europe. There is also a growing split among its players over whether rugby in Europe is the best route for the game to take at this point.

The Pro14 tournament could expand with the Sharks, Lions, Bulls and Stormers joining the Cheetahs and Kings, while South African teams joining the European Professional Club Rugby tournaments is also a possibility. Nothing is yet confirmed.

“In terms of Pro14, I’m absolutely keeping on with my negotiations and have been for the last 18 months on the expansion of South African teams. What that would look like in a post-Covid world, I can’t tell you at the moment,” SA Rugby CEO Jurie Roux told RugbyPass.com in June.

The sentiment arrives from New Zealand Rugby and Rugby Australia, who appear to be intent on separating from South Africa at club level to pursue a more localised format. There’s also talk of the new Pro18 being split into regional conferences especially with travel restrictions due to Covid.

TV numbers are in Japan

France Televisions’ Mathieu Lartot revealed in February there was an average audience of 5.7million people – a peak of 7m – for the 2020 opening round Six Nations France versus England match. That increased for the following weekend against Italy to 5.8m and a peak of 6.8m.

However, Japan’s victory over Ireland in the last World Cup drew an audience of 29.5 million in the host country and their Pool A decider against Scotland was watched by a record peak domestic rugby TV audience of 54.8 million.

That explains why Japan are flying across the world in a pandemic to make up the numbers for the eight nations spectacle this autumn and winter and other European teams such as Georgia have been left out in the cold.

If the CVC buy-in to the Six Nations is a done deal as French Rugby Union President Bernard Laporte has said, prepare for a changing landscape.