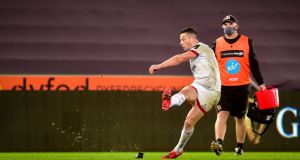 John Cooney has been called into the Ireland squad for Saturday’s Six Nations date in Paris. Photograph: Alex James/Inpho

Ulster’s John Cooney has been called into the Ireland squad for the Six Nations finale against France in Paris on Saturday.

Cooney will provide additional cover at scrumhalf with a fitness concern over Jamison Gibson-Park after the weekend win against Italy.

Gibson-Park reported a tight hamstring after the 50-17 Dublin victory which took Ireland to the top of the Six Nations standings.

The 28-year-old was preferred to Cooney as Conor Murray’s back-up for the Italy clash and came off the bench to win his first cap.

Garry Ringrose has been ruled out of the Stade de France clash after suffering a broken jaw when he made contact with the knee of Italy winger Edoardo Padovani.

The IRFU has confirmed that utility back Keith Earls is finishing his rehabilitation programme at their High Performance Centre.

A decision over Earls’ availability will be made in the next few days.