Johnny Sexton on course to be fit for Six Nations 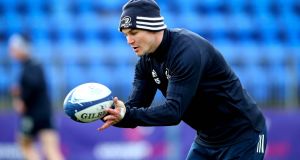 Johnny Sexton has received positive news on his knee injury after a visit to a specialist in London. Photograph: Ryan Byrne/Inpho

Johnny Sexton remains on course to be fit for Ireland’s opening Six Nations game against Scotland at the Aviva stadium on February 1st after his latest visit to a specialist in London this week.

Sexton suffered a medial ligament tear in his right knee in Leinster’s Heineken Champions Cup win in Northampton four weeks ago. Despite reports to the contrary the initial prognosis was for a six- to eight-week recovery period, which would leave him fit for Andy Farrell’s first game as head coach against the Scots, and that remains the case.

A worst case scenario, ie eight weeks, would still make him available for the Scottish game, and word is that Sexton’s specialist was very positive about the outhalf’s recuperation and rehabilitation programme.

Sexton might well be in a position to prove his wellbeing in Leinster’s final two Champions Cup games at home to Lyon and away to Benetton over the next two weeks. But even if he does not play in either of those games, the 2018 World Player of the Year has proven on several occasions in the past that he is capable of returning to Test rugby after a longer lay-off.

During his time with Racing in the 2014-15 season Sexton was rested for 12 weeks at the behest of a French doctor and upon his return, after missing Ireland’s opening Six Nations win against Italy, he kicked five penalties in Ireland’s 18-11 victory over France at the Aviva stadium.