Rugby in the 2020s: What changes can we expect? 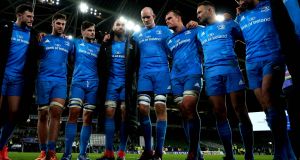 Leinster are a Test side in club kit and could well make it two Champions Cup titles in a row. Photo: Ryan Byrne/Inpho

When Wayne Pivac announced six weeks ago that Sam Warburton would be joining his Wales management team as breakdown coach, he broke the mould. On reflection, the question should be why it took so long. Scrum coaches have been around for years, even as the set-piece has declined in significance: in the 2003 World Cup, the average prop could expect to be involved in 17 scrums, a number that in last year’s tournament shrivelled to fewer than six.

The set-piece still has its moments, as Leicester showed in salvaging an unlikely draw against Harlequins at Twickenham last weekend, but it is not where the future points. When Exeter played Saracens last Sunday there were 42 set-pieces (13 of which were scrums) and 204 rucks and mauls with more than 300 tackles attempted. The scrum is going the way of the four-point drop goal, taking with it another of the game’s unique features in the name of entertainment.

A dictum of the amateur era was that matches were decided by forwards with backs responsible for the winning margin, but distinctions are now so blurred that there are only clear lines of demarcation at the shrinking number of set-pieces.

Exeter returned to the top of the Premiership on Sunday after toppling Saracens 14-7 at Sandy Park in a clash of the heavyweights. The Chiefs scored two tries to take them to 17 in eight league matches. Only one of them has been scored by an outside back, Tom O’Flaherty against Wasps at the end of November. Five have come from back-rowers, four from locks, three from props and scrum-halves and one was a penalty try.

Exeter were the pioneers in going for an attacking lineout rather than a kick at goal after being awarded a penalty and there is no more dangerous side in the Premiership when attacking from 10 metres out. They rarely move the ball wide because they know the surest route to the line.

Leinster went into the new year as the only unbeaten team in Europe, nine victories in the Pro14 garnished by four in the Champions Cup to make it a perfect 13 ahead of the encounter with Connacht at the RDS Arena on Saturday.

The victory at Munster last weekend summed up a side that has not been defeated since the European Champions Cup final against Saracens last May: both teams were well below strength but Leinster’s defence again established the platform and the 13-6 scoreline was the same as when they went to the Top 14 leaders Lyon in the Champions Cup in November.

The team lying third in Leinster’s Pro14 conference, the Cheetahs, have accumulated exactly half the points of the leaders, 21, and all the champions’ rivals in the league have lost at least three matches. Saracens were in the same position four years ago, entering 2016 with 12 victories from 12 and facing questions about going through the campaign unbeaten. The run came to a halt on the second weekend of the new year with Harlequins prevailing at the Stoop, one of four defeats Sarries endured that campaign. But they won the Premiership and, for the first time, the Champions Cup. Leinster, a Test side in club kit, would settle for the double.

The face of the game in Britain and Ireland has been given a transformative look with the private equity firm CVC taking a stake in the Premiership and Pro14 and about to do so in the Six Nations.

Struggling clubs have been given a financial stimulus with both leagues handing over a 27 per cent stake in return for a big chunk of change, but with the Pro14 controlled by the unions involved the cash is being held back for emergencies and special projects rather than wage hikes. The unions, who have agreed to give up 15 per cent of the Six Nations to CVC, well know that the money being offered is not a handout because they are surrendering 15 per cent of their profits each year. They are effectively mortgaging the championship and would be hit by the equivalent of interest-rate hikes if the increase in commercial revenue did not match the 15 per cent CVC will take each year.

Not that CVC is looking at any of its three “acquisitions” in isolation. Even a fool in a hurry would recognise that the game in Europe is organised so haphazardly that the system benefits neither club nor country and overburdens players. “CVC’s arrival into the Premiership, into the Pro14, and probably into the Six Nations, gives us all hope that they can pull everyone together and create a better game, with better revenues, and fewer fixture conflicts,” said Nigel Wray, who has announced he is stepping down as Saracens chairman with immediate effect.

But with CVC having to pay more for much less of a share in the Six Nations than the club competitions, it knows where the money is made in rugby and its plans for a British (and Irish) league will not have meritocracy at their heart. How much control will those running the game continue to have?

Only three of the 10 tier one nations remain under the same management going into this year’s Six Nations and Rugby Championship and what odds on Eddie Jones, Gregor Townsend and Mario Ledesma all remaining in place when the 2023 World Cup kicks off in France? Most of the changes were decided before the World Cup rather than because of it: Australia was an exception with Michael Cheika making an undignified exit as head coach after a tournament for the Wallabies when words spoke louder than actions, while so many coaches had been linked with Conor O’Shea’s job at Italy that he chose to climb over the wall a few months early. Otherwise, Ireland, Wales, France, New Zealand and South Africa, the World Cup winners, will all have a new head coach at the helm.

There is an element of succession in Dublin with Andy Farrell taking over from Joe Schmidt while Jacques Nienaber, the Springboks’ defence coach, is expected to succeed Rassie Erasmus who is stepping back, but not away, to get on with his day job of running the professional game in the country. And Ian Foster has stepped up for the All Blacks just as his predecessor Steve Hansen did in 2011 when Graham Henry moved on.

Wales and France, like Australia, will be dancing to a different beat. Fabien Galthié will find something in a major key after Jacques Brunel’s dirges and Dave Rennie will inject stability after the volatility of the final months of Cheika while Wayne Pivac has a balancing job in Wales after 12 years of Warren Gatland: he wants a more adventurous approach without sacrificing the durability the Six Nations champions have developed.

England and Ireland look the main Six Nations contenders, although France should be more fun with Shaun Edwards hovering over the guillotine, while for once New Zealand go into a new decade not top of the world rankings. The loss of so many players to Europe and Japan is having an effect and it will be interesting to see whether CVC takes a world view of the game and tries to capture its most valuable asset, the All Blacks. – Guardian