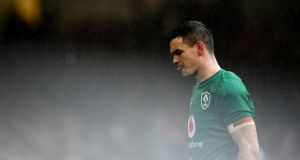 Johnny Sexton during the 25-7 defeat at the Principality Stadium in Cardiff. Photo: Dan Mullan/Getty Images

Wales kept their best for last and, in truth, Ireland reserved their worst. Securing a Grand Slam, and almost pulling up, against the outgoing champions this 14th successive win also saw them supplant Ireland as the world’s second best side. As things now stand Wales would also appear a bigger threat at the World Cup.

For the Welsh, it was one long 80 minute coronation, which will last into the night and beyond. They struck for the game’s first try within 70 seconds of the kick-off and thereafter comfortably kept their defensive red line intact, kept their heads and their discipline, kept kicking their penalties through Gareth Anscombe and kept Ireland comfortably at bay until the last play of the game.

For the Irish supporters in attendance it was hard to believe and even harder to watch. The decision to have the roof open probably played into Welsh hands, and the home side on the whole also benefitted from the unlucky George North departing, as it brought in Dan Biggar’s kicking and aerial games.

Wales won the gain-line by and large. When they had the ball, they were better able to carry and clear out, whereas when Ireland had it the Welsh line speed and tackle efficiency forced them onto the back foot and to play with slow ball.

For such an experienced team, it was alarming to see how Ireland became so flustered - kicks out on the full by Conor Murray and Johnny Sexton rather summing up their day. Their discipline was also poor, on a day when it was critical, with the penalty count 11-7 at one stage, albeit referee Angus Gardner was very pedantic.

None of Ireland’s key men performed, and their back-row was completely eclipsed by Josh Navidi, Justin Tipuric and Ross Moriarty. In truth, Wales didn’t actually create much after Hadleigh Parkes’ early try, but they didn’t have to. The conditions were a factor, but Ireland looked blunt and like a team that Wales had figured out.

In the event Storm Hannah missed Cardiff but steady, light rain returned shortly after kick-off and persisted throughout. Before kick-off there was a minute’s silence at the behest of both Unions for the victims of the Christchurch, and then Ireland’s Call and Land of My Father was bellowed out with gusto.

That was still ringing in the ears when Gareth Anscombe kicked off towards Jacob Stockdale and when George North bundled him into touch it sparked a thunderous roar. Two phases after the lineout, in what may have been a pre-determined ploy, Anscombe chipped over the advancing green line into space, with Rob Kearney desperately trying to come infield from wide to the right, and Parkes gathered and scored.

Ireland threatened a quick response when Johnny Sexton caught Wales by surprise when cross kicking a penalty to Stockdale, who escaped from Gareth Davies but was hauled down by Parkes.

Wales lost North in the ninth minute to what seemed like a bad injury to his left wrist and opted, surprisingly, to bring on Dan Biggar at outhalf, and so in the ensuing re-shuffle Anscombe switched to full-back with Liam Williams moving to the wing.

Then it was Ireland’s turn to be come through a defensive set, which was completed by the locks combining as Ryan completed a chop tackle on Tomas Francis and Tadhg Beirne was over the ball for a relieving turnover penalty. However, it was one of the few big moments which went Ireland’s way.

Both sides frequently went high into the air with the slippery ball, and though Stockdale did well to gather and buy time on the deck when gathering a bomb by Biggar, Sexton went off his feet. Anscombe nailed a whopping 50 metre penalty for a 10-0 lead.

It would have been 13-0 had Gareth Davies not dived into Bundee Aki on the ground after the whistle, so leading to a reverse penalty. Sexton then found space in behind with a good kick and pressure from Earls forced Anscombe into conceding a lineout just outside the Welsh 22.

But when Ireland went to the corner with a penalty, the Welsh forwards stayed on the ground and defended ferociously to earn a turnover scrum, albeit Gardner should have penalised Justin Tipuric for side entry.

This was compounded when CJ Stander fumbled a tap indirect penalty at the base of a scrum, so conceding a scrum to Wales. Then after a poor throw by Best, Tadhg Furlong was offside, so enabling Anscombe to kick Wales 13-0 ahead.

Just to top the first-half off, Wales had the last moments as well. Murray kicked out on the full and Cian Healy’s pass missed Earls, prompting the TMO to go back and see that Ryan had knocked on. Sure enough another questionable scrum penalty, awarded against Healy when his hand briefly touched the ground, led to Anscombe closing out the half by making it 16-0.

Ireland had hardly fired a shot.

On the resumption, Wales happily went into defensive mode. Navidi forced a turnover when holding up Ryan in the tackle, and then Sexton’s up-and-under went out on the full. Although’s Ireland’s defensive maul forced a turnover, Healy took out Francis beyond the ball and was penalised. Anscombe landed the penalty for 19-0.

Sexton went long with the restart, and the ball rolled into touch-in-goal. Stander, trapped by Tipuric, was pinged for not rolling away and Anscombe made it 22-0. It was getting to the stage where you couldn’t make it up. By now the Welsh crowd were happily switching between Bread of Heaven and Land of My Fathers.

Even when Ireland went through the phases, there was a miscommunication between Sexton and Kearney when the latter came inside for the switch pass, which instead went to ground behind Stockdale and over the touchline. Welsh pressure brought another attempted attack to an end, before Earls conceded a five metre scrum, but David Kilcoyne won a penalty.

Not that it mattered much. Andrew Porter conceded the daftest penalty yet when following up his tackle by driving through the ruck without releasing. Anscombe made it 25-0.

Wales would have happily had the game on for ever, whereas for Ireland, long, long before the end, it couldn’t have ended too quickly. Cue a minor endgame subplot as Ireland hammered at the Welsh line who defended with zeal to ensure they retained the ‘nil’ part of the equation, before Ireland were spared by that ignominy when Jack Carty put Jordan Larmour over and converted.

Ireland will try to put this, eventually, to one side and make it a one-off, but the ramifications of this no-show will likely be felt for some time.