England turn to science to focus minds on the breakdown 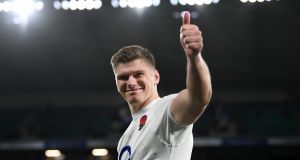 England have turned to the unlikely duo of Albert Einstein and Isaac Newton for inspiration as the Six Nations title race enters its final days. Rugby’s dressingrooms are not traditionally full of players debating the science of motion but England’s coaches are keen to focus minds on the area they believe will be pivotal against Scotland on Saturday.

Last year in Edinburgh, England finished a distant second at the breakdown, and Eddie Jones has been reminding everyone of Newton’s second law, subsequently taken on by Einstein. According to Jones’s scrum coach Neal Hatley, this should translate into England hitting harder around the tackle area.

“Eddie brought in Newton’s and Einstein’s theories: that force equals mass times acceleration,” said Hatley. “Some of it is going back to what’s simple: hit the ball hard, carry hard, pump your legs, fight in the contact, fight on the floor and then be aggressive over the ball.”

Hatley does not pretend all his players have a degree in applied physics – “there were one or two who pretended they knew...we’ve got one or two who read” – but the objective of blasting Scotland’s backrowers off the ball is not exactly rocket science.

“You can be more efficient at the breakdown if you’ve got momentum on the ball,” said Hatley, clearly hopeful the force will be with England this time.

“With 200-plus breakdowns in a game, we’ve put in a lot of time and effort with the players to make sure we recognise what an important area it is. Scotland are a good side, Hamish Watson is back, and they have people who really attack the ball. We’re going to have to be better again.”

England also insist they will be ready for whatever is heading their way at Twickenham having been harried and hassled on and off the field en route to their 25-13 loss at Murrayfield last year.

“We expect them to be abrasive, and they will come here looking for the biggest performance of the Championship,” said Hatley.”Everybody finds a gear coming to Twickenham to play England. They’ll be fired up and ready to play, as will we.”

Players such as George Ford, who was the target of some sledging in the tunnel at Murrayfield which led to an altercation between Owen Farrell and Ryan Wilson, are also looking forward to renewing auld acquaintances.

“Obviously there was a little incident before the game last year,” said the Leicester outhalf. “There is more of that goes on than you think. It just happened to be as we were walking down the tunnel. Any team would try anything to get an upper hand or to put the opposition off. When you get two passionate nations who come together to play an intense Test match with a fair bit riding on it, you’re probably going to get instances like that.”

As a playmaker Ford is fully aware every opposing side will seek to ruffle his composure in some shape or form.

“The amount of times I’ve been at the bottom of a ruck and they’ve tried to put a hand in your face or an elbow in your face‚ things like that. Just to try and rough you up a bit. That happens in every game. The No 10 plays such a pivotal role in terms of running the team and making decisions constantly, so of course you’re going to be a target.”

In this particular instance England are particularly wary of giving Scotland’s playmaker Finn Russell too much leeway.

“We’ll try and put pressure on Finn Russell at the weekend, legally, in terms of coming off the line and forcing himself to make decisions that he doesn’t want to make,” said Ford.

“He’s a very dangerous player, and given time and space his skillset is very good. There are different ways of disrupting that. One of ours will be to physically stop Scotland on the gainline, and to slow the ball down so he doesn’t have such an armchair ride.”