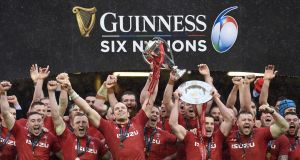 15 Liam Williams – Another accomplished display by the Wales full-back, who was immaculate throughout. Rating: 7

11 Josh Adams – Scored three tries during the tournament, and was a consistent threat to Ireland’s defence. Wales have a new star. Rating: 7

10 Gareth Anscombe – Produced the performance of his life, kicking 20 points and driving his team to Six Nations glory. Rating: 9

9 Gareth Davies – Solid in parts, but he there were also errors as he failed to make his mark consistently on the contest. Rating: 6

1 Rob Evans – Relished his battle opposite Tadhg Furlong in the scrums. A tireless shift. Rating: 7

2 Ken Owens – One of Wales’ most consistent performers over the past 18 months, he again shone when it mattered. Rating: 8

5 Alun Wyn Jones – Wales’ immense captain has been a tower of strength all season. World-class. Rating: 9

6 Josh Navidi – Made his customary high tackle count as Wales took charge early on and never relinquished their grip. Rating: 7

7 Justin Tipuric – Tackled himself to a standstill and was prominent at the breakdown. Rating: 7

Replacements – Another superb collective effort from the Wales replacements, who have proved instrumental to their team’s success this season. Rating: 7