Angus Kernohan made his chance count in Grand Slam win 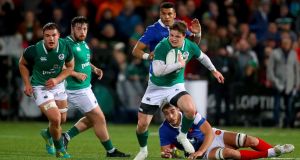 Angus Kernohan understands the value of opportunity. Overlooked initially for a place in the Ulster academy despite being part of the Ireland Under-20 team last season, he was awarded a contract last September in recognition of some high profile outings with Dan McFarland’s senior team.

Injury deprived him of a place in the first two games in this season’s Under-20 Six Nations Championship but he returned in time to start the final three matches, a campaign that culminated in a Grand Slam on Friday night, when Noel McNamara’s side beat Wales 26-17.

Against Italy and France he was starved of opportunity in attack but on 39-minutes in Colwyn Bay he was given a chance to demonstrate his attacking prowess. One opportunity and he took it gleefully, accelerating outside the cover and then swerving in and out of red clad shirts, a counter-attack that culminated in a try for Jonathan Wren, providing Ireland with a pathway into the contest.

He said: “Sometimes rugby is just as a game where the ball just doesn’t come to you, particularly on the wing. It can be frustrating but I think you just have to trust in the system as in there were a couple of times in the last game, there were flankers carrying down the channel and they made a good impact as well.

“That was a lovely ball from Jake (Flannery), just to get that offload away. Whenever there is a bit of space in front of you, it’s nice to put the foot down. Coming in and playing those three games means I have played over half a championship so you do feel part of it.

“Hopefully I have played my part in helping the boys get the victory. It was a really closely knit team and it feels unbelievable. I’m speechless, to be honest. We didn’t make it easy for ourselves but we have been a team right throughout the championship that has dug in and found a way to win.

“I think that’s an important thing behind great teams. We have real unity in the team and that common goal of putting teams to the sword. We did that in the end and it just shows with Colm (Reilly) coming on at the end and scoring.

“Your replacement scrum-half making such a big impact shows how much we trust our squad and rely on those guys. I’m completely elated, it was a brilliant win.”

It would have been easy for the Irish team to become disheartened, their performance off kilter in the first half and on three occasions, the television match official, Stuart Terheege, correctly it seems, ruled against the visitors when reviewing try scoring referrals.

Kernohan explained: “Some of them you can do things about. As in the forward pass, you maybe go ‘if we had held our feet a little bit.’ There are those little subtleties that you are able to change but sometimes the calls are just not going to go your way.

“I haven’t had a close look at it but the first two in particular looked very close. But as you say, just not panicking and trust in the system and trust in each other. We are really good at that. Whenever decisions don’t go our way, we come together as a team and have a huddle and take a couple of deep breaths to clear the mind and refocus on the task ahead.”

It was pleasing to make his Ulster senior debut this season but the chance to play with his peers at underage level and what they have achieved this season is something he’ll treasure. “It is a different kettle of fish (to play senior rugby) but it is something that is really nice to play with guys your own age. When you pull on that green jersey, it’s very special. The U-20s is a very important pathway, it’s just brilliant.”