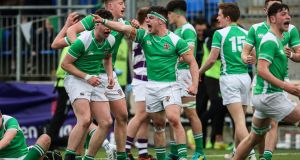 Gonzaga’s Henry Godson and his team-mates celebrate at the final whistle of the Leinster Schools Senior Cup semi-final against Clongowes at Donnybrook. Photograph: Gary Carr/Inpho

Gonzaga created history by making the Leinster Senior Cup final for the first time on the back of the unlikely hat-trick hero Henry Godson, a loosehead prop.

The Clongowes cards were placed immediately on the table as their forwards looked to narrow the Gonzaga defence by attracting defenders in close, the ball then spread into the midfield where Joe Carroll and Hugo Philips lurked menacingly.

The Sandford Road school dealt with the carriers and reacted quickly to a turnover for left wing Brian Barron to test out Luke McDermott up the left.

It was all far too hectic as the rush of adrenalin was accompanied by the rush of defences, Gonzaga number eight Jack Barry angling a kick under pressure and Clongowes scrumhalf Ross MacGoey passing in between runners into thin air.

The settling-in process did not have to be costly for either side and Gonzaga outhalf Harry Colbert nursed the ball inside the 22 where a Purple and White lineout malfunction had to be rescued by stout defence.

It was only a matter of time before one side put their plan together.

Their outhalf David Wilkinson nudged the ball right up to the line where Gonzaga’s Fergus Ó hOisín made a smart decision in taking responsibility with Mark Galvin closing in rapidly.

However, the Clane school was in position and an interchange between Philips and Galvin was sweet enough for the former to finish in style in the 14th minute.

This had an immediate impact, prop Conor Duff snatching a loose ball on the floor and a high tackle producing a penalty, prompting a promising attack which floundered on a knock-on at the posts.

Gonzaga were living dangerously inside their own half, feeding off scraps at the breakdown, hooker Hugo Fitzgerald forcing a penalty.

Jack Connolly made up for previously kicking the ball dead with a beauty of a line kick.

The scrumhalf was the most influential player on the pitch, his kicking game reminiscent of Conor Murray.

Their maul was magnificent too, moving stealthily forward before the hard yards were painstakingly accumulated for Godson to pile to the line in the 27th minute.

Gonzaga were greedy for more, none more than Godson, who used the pick-and-jam to bag his second, Connolly’s conversion making it 12-5 in the 32nd minute.

It looked like the message at half-time has been to look for control, through kicking, rather than a miracle ball.

Clongowes were about to hit back when Carroll broke strongly with Galvin to his left, the centre keeping the ball instead of trying his luck.

Their openside Thomas Gilheany latched onto a second overthrow in the space of three minutes to provide momentum.

They caught Gonzaga napping at the back of a maul and hooker Ethan Noone bulled over for Wilkinson to level it in the 46th minute.

The softening up process continued from prop Ryan McMahon and locks Doyle and Lonergan before McDermott came from deep to apply a clinical finish, Wilkinson clipping the conversion in the 50th minute.

That man Godson was alert and on hand to make Clongowes pay for an overthrown lineout for his hat-trick, Connolly’s conversion making it a three-point lead in the 62nd minute they had no intention of giving up.

Replacements: A Henry for Kirby-O’Briain (20 mins).