Joe Schmidt bracing for 'tight game' against the USA 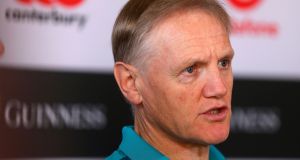 After the Lord Mayor’s Ball and all that. No matter what way you look at this game, everything has conspired to really put it up to this group of Irish players. They are 100/1 on to complete a winning November, so backing up last week’s historic win and in the process availing of an opportunity that, realistically, will not come the way of most of them until next August at the earliest.

You’d feel some empathy for them. Win by 50 and it might actually be devalued. Struggle to get over the line, and it might not reflect well on them, albeit the coaches will learn more about these players if they are forced to perform under pressure. Either way, pretty much all bar the sole survivor from last week, Garry Ringrose, have sufficient credit in the bank to withstand a bad day at the office here.

Go through the team and it looks like a hugely significant game for so many with regard to their Test futures and specifically the World Cup. Versatility will be worth its weight in gold and so two weeks after stepping in as an emergency outside centre, Will Addison can underline his worth as a fullback.

Similarly, with the back three cupboard a little bare, opportunity knocks for Andrew Conway and Darren Sweetnam, while in being afforded his third cap, Stuart McCloskey, for better or for worse, goes head to head with the Eagles wrecking ball, the ex-Chicago Bears American Footballer Paul Lasike, now with Harlequins.

This is a first Test start for John Cooney, who also has versatility to his bow, but seems to have three “9s” ahead of him. Similarly, the slimmed-down duo of David Kilcoyne and Finlay Bealham have earned this recall, but no less than Niall Scannell, need to avail of it.

Also bearing in mind Devin Toner’s revival and revived importance, and the emergence of Tadhg Beirne, both he and Iain Henderson will be acutely aware that the secondrow has rarely looked more competitive.

As for the backrowers, well, it’s the backrow. ‘Nuff said. It was ever thus.

It’s hard to view this game in any other context.

Of course, this relatively rare opportunity to start in an Irish jersey at the Aviva Stadium is a source of pride and motivation in its own right. Helpfully too, this is both another Saturday night game under lights in the Aviva Stadium and, in what is a barometer of Irish rugby’s rude health right now, another sell-out.

Mind you, so too was the Fijian game last November when, a week after the record 38-3 rout of South Africa, Ireland struggled to put away the Fijians by 23-20 courtesy of two late penalties by Ian Keatley. Seven of this starting XV lined up for the kick-off that night, but as Rhys Ruddock suggested yesterday, the memory of that game may be beneficial.

It’s hard to get a true handle on the Eagles, but they have won nine Tests out of nine this season. Their sole defeat was against the New Zealand Maoris in a non-Test match at Soldier Field immediately following Ireland’s 54-7 win over Italy, and six of that Irish starting XV are retained in this line-up, and 14 of the match-day 23.

But the Eagles were without their European-based professionals as it fell outside the Test window, and more relevant is their first ever Test win over a tier-one country last June, when they beat Scotland 30-29 in Houston. Tellingly, all bar the injured AJ MacGinty of the back line have been selected by Gary Gold for this game, along with six of the pack.

“America aren’t going to make anything easy for us,” asserted Joe Schmidt. “I wouldn’t be surprised if this game is a relatively tight one. Last year, in this particular bracket, we played Fiji and won by three points. They are the games that we intentionally put players out there, wanting to put them under pressure, wanting to see how they respond under pressure, and they had to scramble their way through that game.”

This is a huge game individually but, as Ruddock also admitted yesterday, the key for these players is not to allow themselves to think like that.

A tricky one, in many ways.