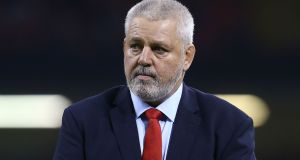 Wales head coach Warren Gatland: “I am aghast that people are turning on New Zealand because they are, to me, still the best team in the world.” Photograph: Getty Images

A week after Rassie Erasmus’s final match in charge of Munster last year, South Africa played Ireland in Dublin and suffered their record defeat by a Celtic nation, 38-3. The second most successful team in the history of international rugby after New Zealand had gone from being feared to a laughing stock and then an object of pity within a decade of winning the World Cup.

Erasmus’s remit, although it was unclear then what his exact role with the Springboks would be, was to restore self-respect, belief and confidence. His first match in charge was against Wales last June in the unlikely setting of Washington DC and ahead of South Africa’s final game of the year against Wales in Cardiff on Saturday, the house of cards he started to construct then has been fortified rather than blown down.

Two years ago, South Africa lost to Italy in Rome. Willie le Roux was their fullback that day, as he has been this month after missing the opening match at Twickenham because his contract with Wasps prevented him from playing. “We have got our Springboks back,” he says when asked about the turnaround under Erasmus. “There was a stage when people did not fear us, but the structures he has put in place mean the guys are playing for each other more and we enjoy wearing the jersey.”

South Africa are seeking their third victory of the tour after losing to England by a point in a match they largely dominated. Beating Wales used to be a given: the countries first played each other in 1906 and it was not until 93 years later that Wales recorded their first victory. Now, however, Warren Gatland is seeking a fourth successive success against the Springboks – at the end of an autumn when there has not been a perceptible gap between the hemispheres.

Factoring out the weakest country in each of the Six Nations and Rugby Championship and the tally after the first three weeks of the autumn series is three victories each with Wales against South Africa and England’s encounter with Australia to come.

The matches have all been close, with the biggest winning margin being the seven points Ireland bettered New Zealand by last weekend and if a 50 per cent record does not appear significant for the north given home advantage and opponents at the end of their seasons, history says otherwise.

Not one of the old Five Nations sides has a 50 per cent record against New Zealand, South Africa or Australia. The only fixture that comes close is England and the Wallabies, with the latter two victories ahead. The overall percentage is 26.5, which is why there has been talk of a gap through the generations.

“I think the gap has closed,” says Gatland, the Wales head coach. “It is great for rugby and next year’s World Cup that we have eight or nine teams who are capable of beating anybody on their day. I am aghast that people are turning on New Zealand because they are, to me, still the best team in the world, but there could have been more northern hemisphere successes this month. There is pressure on us to perform on Saturday.”

Erasmus agrees. “It is definitely much more even,” he says. “You do not know who is going to win every single match. The All Blacks can lose to Ireland, Ireland can lose to Wales and so on. Beating Wales would make the tour a relative success because we would like to have won all four, but it would mean we had won five of our last seven games and lost the others by a point or two. It would give us confidence but we have to be realistic about where we are. The graph is going up, but we are not close to where we must be if we are to be competitive in the World Cup.”

When South Africa trudged off the pitch in Cardiff in December last year, few would have backed them to win in New Zealand 10 months later. “We have new coaches and structures and are a different team,” says the number eight Duane Vermeulen. “We started from the bottom, got the basics right and are now working on some of the finer things.”

The current captain, Siya Kolisi, who played that afternoon adds: “Rassie has made us realise that what is important is being a Springbok not an individual.”

Erasmus has used 50 players this year, but eight of the forwards who will be involved against Wales featured in Dublin last year. “We have been consistent in our approach, which we had not been,” says one of them, the Bath backrower Francois Louw. “A group of core players has been through it all and while we are not the finished product, there has been a massive improvement since we last played Wales. It has been a tough journey.”