Johnny Sexton is up for the main Player of the Year award but what other gongs could Irish rugby collect on Sunday? 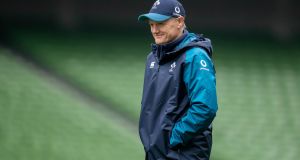 Joe Schmidt is a frontrunner for Coach of the Year. Photograph: Morgan Treacy/Inpho

Reflecting the year that was in it, Irish rugby has never been more prominently featured at the annual World Rugby awards, which will take place at the Salle des Etoiles, Monte Carlo, tomorrow evening.

In addition to Johnny Sexton being among the five players shortlisted for the prestigious World Rugby Men’s XVs Player of the Year, the Ireland team and Joe Schmidt are also contenders for the Team of the Year and Coach of the Year respectively, although no shortlist has been officially named.

Going into today’s final round of international fixtures for the calendar year, Ireland have won 10 of 11 tests in 2018, which encompassed a Grand Slam, a series win in Australia, and home wins over Argentina and, historically, the All Blacks. The All Blacks won 11 of 13 matches, incorporating the defence of both their Rugby Championship and Bledisloe Cup triumphs.

Beyond the world’s number one and two ranked sides, it’s hard to think of any serious rivals, although the New Zealand sides that won the World Cup Sevens men’s and women’s titles in San Francisco would have their claims as well.

In addition, Jordan Larmour is one of only three players shortlisted for the World Rugby Breakthrough Player of the Year. After making his test debut against Italy in February, the 21-year-old made six appearances off the bench in the Grand Slam and series victory in Australia, before scoring a hat-trick on his full debut against the Italians this month.

The favourite for this award, however, is South African left wing Aphiwe Dyantyi. The 24-year-old marked his Springbok debut with a try against England in June, and started all 12 of South Africa’s tests in 2018, scoring six tries, including braces in the wins over Argentina and New Zealand. The 25-year-old All Blacks loosehead prop Karl Tu’inukuafe completes the shortlist.

CJ Stander’s try for Ireland in their Grand Slam-sealing win over England at Twickenham is one of four tries shortlisted for the Try of the Year 2018. However, this try faces stiff competition – from Beauden Barrett’s fourth try at Eden Park in the second Bledisloe Cup test when completing a pitch-length counter-attack; Brodie Retallick’s try against Australia in Sydney; and Sean Maitland’s pitch-length try against England at Murrayfield which was initiated by “that pass” by Finn Russell.