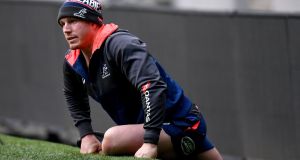 Australia have been dealt a significant injury blow after their breakdown master David Pocock was ruled out of Saturday’s final November international against England at Twickenham.

The number eight injured his neck in a 26-7 victory over Italy last weekend but was named to start by coach Michael Cheika when he announced his side to face England on Thursday.

Pocock has since failed a fitness test and although Australia have yet to confirm a replacement, it is likely Pete Samu will step up from the bench, which could see a place among the replacements for back Kurtley Beale, a surprise absentee from the matchday 23.

“He’s hurting but he’s desperate to play,” Cheika said of Pocock on Thursday. “He’s had them at him all year. He puts his head into places people go to and he’s copped a fair few whacks in there this year.”

Cheika added that it was never a question of risking Pocock if he was not fully fit for a fixture that provides Australia with the opportunity to finish a dismal season on a high.

“I won’t take a risk with him physically. If there was ever a risk, if he said he couldn’t do it, then obviously not,” he said.

Pocock is recognised as among the best “fetchers” in world rugby, turning over opposition ball at rucks and breaking their momentum on attack. His loss will be greatly felt by the Australians, who have won only four of their 12 Tests in 2018.

Pocock, who took a year out from international rugby in 2017, has been nursing a neck injury for most of the season which forced him out of Australia’s home Rugby Championship Test against South Africa in September.

He has been playing in the number eight position to accommodate captain Michael Hooper on the flank, but has won the majority of his 77 caps on the side of the scrum.