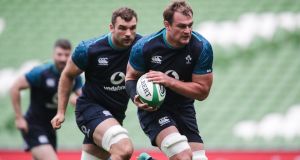 Ireland captain Rhys Ruddock and Tadhg Beirne in action during the captain’s run at the Aviva stadium on Friday. Photograph: Billy Stickland/Inpho

Amid all the heightened speculation regarding Joe Schmidt’s future beyond the next World Cup, and the distinct impression that he will return to New Zealand for family reasons, it’s worth noting that were this purely a rugby decision he would have every reason to stay.

This is his sixth full season with Ireland, his longest stint in one job, and followed three seasons with several of these players at Leinster beforehand. Hence, before renewing his last contract extension, Schmidt wondered whether the players might have needed “a fresh voice”.

“It’s those poor Leinster players who’ve had to put up with me whingeing at them, or pushing them or cajoling them or patting them on the back, for eight years. They’ve got to be sick of me by now,” he said last February.

This is patently not the case. His methods have never reaped a bigger dividend than in the last year. Pretty much all the Irish players say he’s the best they’ve ever worked with.

Rhys Ruddock, who captains Ireland against the USA on Saturday, joined Leinster a year before Schmidt’s arrival there in 2010, but yesterday there seemed no trace of weariness with Schmidt’s voice

“For the playing group, I don’t think that’s an issue. Also, some of the players haven’t lasted as long as he has. The players are always changing,” noted Ruddock with a smile.

Ruddock citied how football managers “still have the backing and the respect of the team, and for me anyway, Joe certainly has that.

“He’s been around a while but he’s keeping everyone in the right frame of mind and everyone on their toes, and there’s a good working environment, so as a player I don’t see that as an issue. Whether he does or not I don’t know. But not from our end.”

Furthermore, there are plenty who’ve coached international teams longer than Schmidt, and it’s usually worked too.

Warren Gatland is coming to the end of his 12-year reign as Wales head coach. Steve Hansen is, apparently, of a mind to extend his tenure into a decade, and has been with the All Blacks ticket since 2004. Graham Henry served eight years as All Blacks coach, culminating in the 2011 World Cup. Clive Woodward’s eight-year tenure with England also incorporated World Cup success in 2003.

Of course, as the latter example also demonstrated when Woodward stayed on for a poor 2004 Six Nations and three heavy beatings on their tour of New Zealand/Australia, the key is leaving when most still want you to stay.

Ireland have won a Grand Slam and a third title in five years, a series win in Australia and historic wins over the All Blacks. Add another strong Six Nations and, at the least, going beyond the World Cup quarter-finals for the first time, and Schmidt might feel then would be a good time to move on.

But, purely as a rugby decision, there remain more compelling reasons to stay, not least the production of line of talented and dedicated young disciples. Only last Tuesday, Schmidt was again extolling the work ethic of the playing group, and the support staff too, “from nutritional to medical, to analysis, to the coaching, to the strength and conditioning, and the provincial staff.”

Detailing how each of the four provinces work to help Team Ireland, he ventured: “I think the alignment has never been so strong. It has a dual benefit, the managing of players and bringing them through.”

Asked if there was another system in the world as aligned as the Irish one he named New Zealand, and noted that their provincial coaches would get together every six months and that “the primacy of the All Blacks was always paramount”.

He’s also been increasingly moved by the Irish team’s support from the public too. And therein lies another rub, for even when ranked second in the world, Ireland will always retain a certain underdog status, especially against the All Blacks.

Besides, even were he to go back to New Zealand, it doesn’t necessarily follow that he would become part of the All Blacks ticket straight away. The NZRU and the All Blacks tend not to operate that way. He might take a break from rugby, and one wouldn’t rule him returning here or this part of the world some day.

For the fourth time this month, and in a departure from previous format, the IRFU announced the team to play the USA thus: “The Ireland coaching group have named the matchday squad to play the USA in the final game of the 2018 Guinness Series.”

Andy Farrell, Simon Easterby and Richie Murphy are under contract until 2020, and if Schmidt does confirm his intention to move on after the World Cup early next week, the likelihood is that Farrell will assume the head coach role until the end of the 2019-2020 season. Perhaps either then, or beforehand, Stuart Lancaster might be re-united with Farrell as the backs/attack coach.