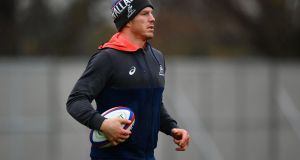 Australia are expected to give David Pocock until the last possible moment to prove his fitness for Saturday’s encounter with England after it emerged their preparations have been further disrupted by a sickness bug that has swept through the camp.

Israel Folau and Bernard Foley are the latest victims of the bug, which initially hit the squad in Italy last week and has affected around 10 players and members of staff. Both players took part in Tuesday’s training session but it is hardly the ideal build-up as Australia look to end a run of five straight defeats to England on Saturday.

Pocock has not been affected by the bug, but was largely a bystander at training after the neck injury he sustained in the 26-7 win over Italy. He missed training on Monday – as did Folau and Foley – and while he took part in the warm-up on Tuesday, he stood on the sidelines during the contact part of the session.

The Wallabies also denied suggestions they are indulging in mind games over Pocock’s fitness after Eddie Jones greeted the news by saying: “When I heard it I thought, ‘Here we go again.’”

With Australia having a scheduled day off on Wednesday and Michael Cheika set to name his team to face England on Thursday, time would appear to be running out for Pocock, but the Wallabies head coach will want to give his hugely influential back-rower every chance to prove his fitness.

In August, Pocock suffered a similar neck injury against the All Blacks and, while he was not able to face South Africa two weeks later, it was not until the captain’s run the day before the match that the 30-year-old was ruled out, having initially been named to start.

Pocock has also been known to play though the pain barrier and it goes without saying Australia’s chances in their 13th and final Test of a trying year are significantly enhanced if he is on the field.

Standing by if Pocock does not make it is Pete Samu, who would make only his third start for the Wallabies. Asked about Jones’s comments, he replied: “He probably thinks it’s mind games from us, but if [David’s] not right, he’s not right. We’ll give him every opportunity to be right this week.”

Meanwhile, Chris Ashton’s international comeback has stalled after the England wing was ruled out of Saturday’s climax to the autumn series against Australia by a calf problem.

Rob Howley says that Wales will “move on quickly” from the blow of losing Leigh Halfpenny for Saturday’s November Series finale against South Africa.

The goalkicking fullback suffered concussion following a challenge by Australia centre Samu Kerevi when Wales beat the Wallabies 10 days ago.

Kerevi escaped sanction after the incident, but Wales are now without 80-times capped Halfpenny for the Springboks fixture in Cardiff.

“He did some training on Saturday morning and he was still feeling a little bit light-headed. It is just a commonsense approach, really. A player’s welfare comes first. He unfortunately misses out this weekend.”

Howley, though, confirmed that wing George North, who suffered a dead leg and was forced off during the 9-6 victory over Australia, is back in full training and available for selection.