Winning the World Cup is not just a dream, it can become a reality 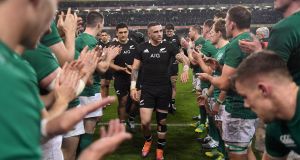 The Ireland players form a guard of honour for New Zealand at the end of last weekend’s match. Photograph: Clodagh Kilcoyne/Reuters

Last Saturday night Irish people around the world threw their collective hearts into the slaying of a myth. Ireland out-thought, out-muscled, out-lasted and thoroughly bashed up New Zealand. A team that for over a century Ireland had a psychological problem with.

Not only were Ireland worthy winners, but the myth of the invincible black jersey vaporised out of the Aviva stadium. A scary bedtime story. A lie that should never have been told. A myth, now gone forever.

Slain, with a try scoring switch play, down the short side.

Ireland and New Zealand are both two small island nations with completely opposing sporting histories. Long ago New Zealand understood that a small country united behind a team can dominate a sport globally. The Kiwis understand that the size of the population of the opposition may be over 60 million but, and I quote, “the bastards can only put 15 of them on the field.”

Ireland are proving they now have the same attitude. The old order of world rugby is changing.

In a game of supreme physical contact, under the most intense pressure, the Irish players showed that trained correctly and given time, Irish athletes are as good as any on the planet.

Ireland can win the World Cup. I have been saying this for some time. Twelve months out, I am not saying Ireland will definitely win it, but understanding that they can is empowering. The knowledge that on any given day Ireland are capable of defeating any team on the planet means winning the World Cup is no longer just a hope, it is a reality.

I believe the Irish players will grab this once in a lifetime opportunity. So should every Irish person and ride this Irish team like a favourite at Leopardstown. The players and staff are humble and respectful and the nation is rightly proud of them because they have earned our admiration and support.

I wasn’t surprised that less than 24 hours after defeating New Zealand, the noises started about talking down any possibility of Ireland winning a World Cup.

The negativity gushed onto the airways and social media. The tall poppy syndrome in full force. I’m not listening to them and neither should you. As Einstein said: “Keep away from negative people, they have a problem for every solution.”

In reality, those negative voices are an irrelevance. Leadership is what you do, not what you say and by their on-field actions this Irish team have shown the world they are capable.

Ireland play the USA tomorrow. I have visited the States as a player and coach many times. Rugby is growing there at a rapid rate and the Americans are embracing rugby’s culture of inclusiveness, enjoyment and community.

I was given a statistic yesterday that tells a tale. Each year there are approximately 1,360,000 school athletes dreaming of making it to the NFL. In reality, only nine in every 10,000 will make the draft with the rest never playing American football again. It is clear there is an ocean of unidentified rugby talent in Stateside.

Major League Rugby, the USA’s professional competition, is about to enter its second season and appears to be both healthy and sustainable. With the medium-term goal of having 12 financially viable, professional teams the USA will grow and improve as they reap the rewards of a high-performance system supplying quality players to their national team.

Tomorrow will not be easy for the Eagles, but in a relatively short period of time - possibly before RWC 2023 - the Eagles will be spreading their wings.

Imagine having teams in Galway, Moscow, Marrakech and Oslo and over 50 stops in between. The logistical nightmare and steep costs of bringing rugby together in the States is the enemy.

High-performance programmes are the key. It will take time for the Eagles to enter into tier one international rugby. But when it all comes together, the Americans will experience some unimaginable rugby experiences, like we all had last Saturday.

1 Ireland v Scotland: Doris’ day as Caelan set for first cap
2 Six Nations: Pundits, journalists and players have their say
3 Kobe Bryant obituary: A transcendent, if enigmatic, superstar
4 Gary Lineker: ‘60 is just a number, 70 is the one to worry about’
5 Niall Quinn and Gary Owens reassure FAI staff about future
Real news has value SUBSCRIBE