Japan’s Luke Thompson aiming to bow out on a high 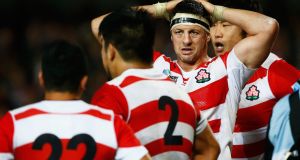 Brighton 2015: spot the Kiwi on 83 minutes, having milled Adriaan Strauss off Japanese ball, all but leaning on the shoulder of Harumichi Tatekawa yet his mere presence keeps Eben Etzebeth honest in midfield. This allows Tatekawa to pass wide for Amanaki Mafi to fend Jesse Kriel before putting Karne Hesketh over in the corner.

Pandemonium. This being Japanese rugby’s Stuttgart ’88 moment that makes Luke Thompson the Mick McCarthy figure in among the natives.

Thompson played every second that day on the south coast of England, the light-heavyweight lock going toe-to-toe with humongous Afrikaners Lood de Jager and Etzebeth.

“We created a little bit of history for ourselves but we didn’t progress, we didn’t get out of our pool,” he remembers with a sigh which perhaps explains why the 38-year-old keeps biking to training every morning in east Osaka.

“Having to play Scotland four days later [in Gloucester] when they were coming in fresh, their first game, yeah, that was pretty rough.”

It was beyond any rational sense of fairness – two top tier nations in half a week – as the rarest comet at a Rugby World Cup faded from view.

“There are no excuses. But it would have been nice to have had a crack at the Scots with a week’s turnaround.”

At this World Cup there truly are no excuses as Japan are gifted seven, eight and seven day breaks in Pool A.

Thompson’s 66th cap for The Brave Blossoms will secure membership to an exclusive club.

“Four World Cups!?” he laughs. “There are two other players from Japan, McCaw and Carter obviously and Brian Lima. Not sure about anyone else.”

There are only a few more. Rory Best is expected to join the three Irish Os, while The Chiropractor (Lima) featured at five tournaments.

Thompson never sought out legendary status but there are not too many Japanese-born locks playing for Japan. In fact, right now, there’s none as Wimpie van der Walt (South Africa), Uwe Helu (Tonga), James Moore (Australia) complete their roster.

“It is a bit of a weakness. I think genetically there’s not a lot of big boys around.”

Of course it’s no weakness at all. It makes him the giant in Hobbiton.

This is the second time he returns from retirement to see what all the fuss is about James Ryan, yet Thompson understands full well where Ryan and others come from. Twenty years ago he left St Bede’s College in Christchurch on a rugby exchange to the south of Dublin, playing a little for the local first team alongside two even longer beanpoles than himself.

“I got to know Leo and big Bob Casey a little. Played a couple of games for the ’Rock firsts but I was only 18 so not too many. It was an amazing time, I made friends that I still have to this day. I get back now and again.”

Peter Quinlan, his first son, was born around then and currently plays goalkeeper for Cabinteely FC.

“He’s an awesome kid. A good player in goal for Cabo. He did really well for ’Rock this year too. It is special that we have a very strong link.”

Sounds like the professional rugby seeds were sown in Blackrock?

“Nah, I was too young then. I came home and went to Lincoln University on a rugby scholarship but I was still well out of the mix. Didn’t play for New Zealand schools or anything special like that. I grafted away.

“I was 21 and in the Canterbury NPC squad but when the All Blacks came back from camp I was dropped for Brad Thorn, Reuben Thorne and Norm Maxwell, so it was a pretty stacked line-up.

“Canterbury union had a relationship with Sanyo the company in Japan.

They came to me and said ‘Look there is an opportunity to go to Japan, play for a year as a professional’.

“I said why not, make bit of money before coming back and having another go in New Zealand. I never came back. After two years I went down to another club, Kintetsu, a railway company, and I’ve been there ever since. This is my 16th season.”

“Japan had a heap of injuries in 2017 so I just came in for that week and played the test against Ireland. ”

That was the 35-13 end of tour victory in Tokyo when Joe Schmidt was blooding the likes of Ryan, Jacob Stockdale and Andrew Porter with one eye firmly on the World Cup.

“I thought that would be enough, but last year I got the itch again.”

Plenty of players feel that itch but are unable to scratch it.

“I was sitting at home in our lounge with my wife [Nerissa]watching Japan play Italy. I must have been quite animated. She goes ‘Would you still like to be out there?’ Without even thinking I said ‘I’d love to get stuck in’.

“‘Well, why don’t you?’ I sat up, ‘Nah, nah, nah I’m retired. I’m happy with that decision.’ She said, ‘If you want to do it we will support you’. It went from there. I sat on it for a while then had a word with Brownie and Jamie.”

“ ‘Aw, you’re a bit late,’ they said, ‘but play Super Rugby with the Sunwolves to see if you are still up to it.’”

One more bash and he’s done.

“I’m finishing for Japan after the World Cup for sure and I’ve one more club season which goes from November to January. That’ll be me. We will move back to New Zealand and work on the farm that myself and my wife have managed to chip away at. We are only just starting out. We breed deer for the antlers that we sell to China and Korea where they make herbal medicines. And a bit of venison. It’s also time for our three kids as well to go back to New Zealand for schooling.”

Japan are desperate to reach the knockout stages of their own tournament. Hence the squad has been stacked with ‘gaijins’ made eligible by the since elongated residency rule.

“Our goal is to make the quarter-finals. We want to win three games again. Play-off footie anything can happen.”

Thompson and others like Mafi bolster their set piece power but really they’ll use the humidity as a weapon by playing high-paced, ball in play rugby aimed at draining the life from Ireland or Scotland. There is a very clear masterplan hatched by Schmidt. Eddie Jones is gone but in his place Tony Brown draws the plays under head coach Jamie Joseph.

After Matt O’Connor was fired in the summer of 2015, and before Leo Cullen was crowned king of the blue realm, Leinster send some feelers down to Otago about the young coach who returns to the Highlanders next season. Capped 18 times by the All Blacks, Brown’s career bloomed and wilted in the shadow of Andrew Mehrtens, Carlos Spencer and Dan Carter. No matter. Coaching is his true calling.

“Brownie is one of those guys that make you want to play for him. At my age you need that to be running around with all these young lads.”

“There are bigger sports in Japan but you can feel it building now. We are in great shape. Really tough couple of camps. Boys are fit and strong and playing well. We are in a good mental state anyway.”

1 Betting shops face uncertain future as they prepare for Monday reopening
2 Timo Werner giving up on Liverpool dream on path to being truly wanted
3 Tianna Bartoletta: ‘After you’ve gotten your medal, you become black in America again’
4 Sports bodies must keep electronic records of participants as training sessions resume
5 Ian O’Riordan: An education in race and running during college days in America
Real news has value SUBSCRIBE