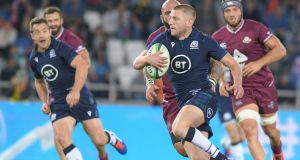 Finn Russell on the ball during Scotland’s win over Georgia. Photograph: Levan Verdzeuli/Getty

Gregor Townsend admits his side need to improve their discipline after seeing Georgia force penalty after penalty out of Scotland.

The Dark Blues were never in any trouble of losing to the Lelos in Tbilisi as they cruised to a 44-10 triumph.

But with less than a month to go before his side kick-off their World Cup campaign against Ireland in Yokohama, Townsend was concerned to see his players cough up numerous penalties as the Georgians’ brute force gave his men problems.

Now he says that will be one of the areas the Scots focus on as the clock ticks down to their Japan 2019 opener.

Speaking after the Finn Russell-inspired victory, Townsend, who welcomes the Georgians back to Edinburgh for their final warm-up clash next Friday, told BBC Radio Scotland: “I saw what I wanted to tonight.

“While there are still areas to improve there I thought that was a big step up.

“Our attack game got going. I still think there’s things we can do better but we did see where the space was whether that be by moving the ball wide or chipping over the defence.

“It was great to see some of the back-line players get on the ball. It was a real good performance for maybe the first 20 or 30 minutes.

“After that, we know we didn’t apply ourselves as well. The opposition came back into the game and we gave away a few penalties. That’s what we’ll be working on next week.”