Pool A: Ireland and Scotland should have too much for Japan 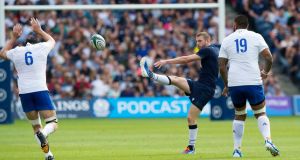 A first round clash between Celtic cousins looks set to decide Pool A, with Ireland and Scotland meeting on the tournament’s opening weekend. Despite failing to defend their Six Nations crown, and having endured some difficult results during the summer warm-ups, Joe Schmidt’s still side head to Japan among the tournament’s favourites - although they will be hoping for some quick improvement. And they have dominated the Scots in recent years - with 18 wins from 24 meetings since the turn of the millennium. Despite this, Gregor Townsend’s Scots will fancy their chances of turning the tables at the Yokohama Stadium. They have a side packed with exciting, attacking talent - think Stuart Hogg, Finn Russell et al - who could find the conditions suited to their brand of running rugby.

Hosts Japan look like the biggest threat to the two at the head of the group - the Brave Blossoms have home advantage and fond memories of 2015 to spur them on, while they enjoyed a comprehensive victory in this summer’s Pacific Nations Cup. Samoa will present their usual physical threat but they qualified behind Fiji and Tonga as the weakest Pacific Island side and needed a play-off against Germany to secure their place. They managed just one PNC win, which came against a struggling Canada side. Group minnows Russia are competing in just their second Rugby World Cup, and earned their spot by default after Spain, Belgium and Romania had points deducted for fielding ineligible players during qualification. The Bears have their work cut out this autumn.

All eyes will be on Yokohama on Saturday September 22nd, with Ireland and Scotland’s campaigns largely hinging on their opening match. However, the winners of Pool A will still have to face the runners-up of Pool B in the quarter-finals - almost certain to be the All Blacks or a resurgent Springboks. A dubious prize. Joe Schmidt’s side were lucky to run out 22-13 winners against a profligate Scottish side in Edinburgh during the Six Nations - this one is more evenly matched than many think.

Japan’s famous 34-32 win over the Springboks in Brighton during the 2015 Rugby World Cup lives long in the memory, and the Brave Blossoms will back themselves to cause another upset on home soil this time round. Their final pool fixture against Scotland might potentially be a shootout for a place in the quarter-finals, and with both sides committed to playing attacking rugby a thriller could be on the cards.

Ireland’s frequent bluntness in attack hasn’t been helped by an injury to the ankle of the brilliant Joey Carbery, who should make the plane to Japan but could be set to miss the opener against Scotland. In his absence another mercurial outhalf could make his mark - Finn Russell’s creativity is key to Scottish hopes, and he can cast a spell allowing the speedy backs outside him to wreak havoc.

Providing Ireland are clinical and disciplined they should come through the opening test against Scotland, with Gregor Townsend’s side to follow them into the last-eight after an absorbing contest with Japan.