Pool B: Rassie Erasmus’s Springboks can turn over the All Blacks 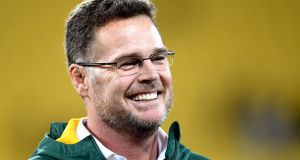 Rassie Erasmus has sparked an impressive renaissance from the Springboks. Photograph: Ross Setford/Reuters

Steve Hansen’s All Blacks are justified favourites to retain their title and lift the Webb Ellis Cup for a third tournament in a row. Four years after their win over Australia at Twickenham New Zealand remain rugby’s dominant force, with frightening talent and strength-in-depth across the pitch. However, there are chinks in the world champions’ armour - a 16-16 draw with the Springboks in this year’s Rugby Championship, as well as the 47-26 reversal against the Wallabies in Perth, prove they are beatable. And it will be South Africa looking to knock them off their perch in Pool B, with the two-time winners looking like a team reborn under former Munster coach Rassie Erasmus.

The two great rivals and powerhouses will slug it out in their opening fixture with the winners virtually guaranteed to top the pool. Italy are a Tier One nation in name but have yet to consistently perform like one under Conor O’Shea, and the Azzurri stand little chance of causing an upset against the two southern hemisphere giants. Despite being the lowest ranked side in the competition Namibia are competing in their sixth-consecutive tournament, which is an achievement in itself, while Canada qualified through the backdoor after seeing off Germany, Hong Kong and Kenya in a repechage play-off. Their defeats to the USA, Fiji and Tonga highlight the size of the task awaiting them in Japan.

Saturday, September 21st, International Stadium Yokohama, the All Blacks versus the Springboks - nothing else needs to be said.

This is perhaps the most uncompetitive pool of all, with Italy looking very unlikely to challenge either New Zealand or South Africa. Meanwhile, both Namibia and Canada look someway short of causing an upset against the Azzurri. However, don’t put it past the Springboks to turn over the All Blacks in the first round and top the pool.

Herschel Jantjies’ sensational South Africa debut, in the 35-17 Rugby Championship win over Australia at Ellis Park, was perfectly timed. The 23-year-old scored two tries against the Wallabies before crossing again in the 16-16 draw with the All Blacks, earning himself a place on the plane to Japan. His scintillating pace and excellent support running will make him a serious weapon in the Boks’ armour.

The Springboks renaissance under Erasmus is such that they will fancy their chances of turning over the All Blacks in what promises to be an absorbing and hugely physical encounter. Italy should pick up regulation victories over Canada and Namibia, with the African side looking for a first-ever World Cup win.