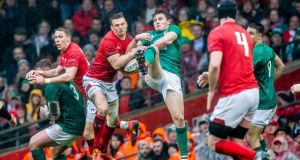 To Wales and Warren Gatland go the Grand Slam and the garlands, and deservedly so. Led magnificently by the colossal and remarkable Alun Wyn Jones, they quickly pinned Ireland down by the throat and never let go until the final play.

To Ireland, the doubts and loss of confidence in themselves and each other that came with this complete and chastening defeat. They didn’t so much lose their tenuous hold on their Guinness Six Nations title as have it wrenched from them.

The game’s plot lines, namely the open roof and Wales’ early lead in those conditions and the enforced introduction of Dan Biggar, played into their hands.

However, as one feared might be the case of a team coached by Gatland and Shaun Edwards, who long since established their ability to have a team perfectly pitched for a big occasion, when Wasps won 14 knock-out games out of 14 in three seasons, Wales had a plan and carried it out perfectly.

Kicking off long toward Jacob Stockdale and then hounding him into touch, in only the third phase off the ensuing lineout Gareth Anscombe chipped into the space vacated by Rob Kearney covering Ireland’s right flank for Hadleigh Parkes gathering on the full to score.

Initially, Ireland’s response was good. Parkes made a try-saving tackle on Stockdale from Johnny Sexton’s clever cross kick with a penalty, and Ireland were rightfully aggrieved at some of Angus Gardner’s refereeing of the set piece.

This was especially so when Justin Tipuric came in so far from the side to kill an Irish lineout maul that it wasn’t funny. Not that Rory Best, Sexton and Joe Schmidt were remotely amused. At 10-0 down, it might have been better policy to take the three points and make it a one-score game. It never threatened to be again.

From there though, this bloodless coup felt over before half-time. It was alarming to see this Irish team’s response when left chasing the game by their opponents’ quicker start. Thereafter they were bullied physically across the gain line in a reprise of that England defeat.

Where then it had been England’s 46 dominant tackles to nine, here it was Wales’ 19 to Ireland’s six; Jones leading the way with five and much else besides, while Josh Navidi again targeted the opposition carries brilliantly.

At least Ireland stayed in the game that day. Here they subsided in losing their cool, their discipline and, amid a welter of handling errors, their way. Given they are such an experienced and successful group of players, this was all the more of a shock to behold.

Most of all, once Wales negated Ireland’s close-in carriers and lineout maul, while also winning the kicking game, Ireland were made to look quite blunt. In the absence of Plan A, there seemed to be no Plan B and afterwards Joe Schmidt admitted Ireland need to be better at changing things up.

“I think that for us we are going to have to make sure that whatever we do deliver that we can change things up. It is very hard to change things up when you don’t get a foothold early in the game and you don’t quite get the set-piece reward that you are looking for, particularly at scrum time.

“We missed a few lineouts but we certainly got a cracking lineout in the right-hand corner five metres out and felt a little bit unlucky not to have got some reward from that.

“But on the back it you have got to be able to rebuild your way into the game. It was a little bit the same with the English game when we didn’t get the result there.”

At the core of Ireland’s loss of momentum in this Six Nations has been the number of frontline players who performed well below their best individually, and this was not a good day at the office for pretty much all of them with the possible exceptions of James Ryan and Keith Earls.

Cian Healy and Tadhg Furlong had negligible impact, albeit not helped by Gardner’s pedantic refereeing and not least at scrum time. Rory Best did not have a good day with his darts, the backrow were thoroughly eclipsed and even Conor Murray and Johnny Sexton could make little impact, with the latter appearing to lose his cool and all confidence in his restarts.

Schmidt has made much of exposing more players to the coalface of Six Nations Test rugby, but with that in mind and given Ireland’s goose was long since cooked at 22-0 down by the 55th minute, for all his understandable loyalty to his halfbacks it made little sense to then keep Jordan Larmour, Kieran Marmion, and Jack Carty back until the 65th, 70th and 73rd minutes

In the fallout, Schmidt couldn’t resist making a complaint about the leaking of Ireland’s selection in advance of Thursday’s team announcement in the media, which has always been a bugbear of Schmidt’s, and that it helped Warren Gatland’s preparations.

“One of the things which is frustrating for us is that Gats knows our team before time. It did help with his preparations. That’s always a frustration for us. At the same time these two teams know each other so well, it is like sibling rivalry almost, and it will be a bit like that with Scotland for the first game because, again, the players know each other so well. So when you know who is going to be where, it is a real advantage.”

That said, Schmidt did admit this was not the reason Ireland lost, and it assuredly wasn’t.

“You kind of want to keep a bit up your sleeve as long as you can but at the same time that is not the reason we lost. The reason we lost is they are a bloody good Welsh team and they had a helluva lot to play for.

“I think they did an incredibly good job of doing it in their home stadium in front of their home crowd and they got them excited early and that was exactly what we didn’t want to happen but you don’t control those circumstances.”