Liam Toland: How Ireland became France in the space of six days 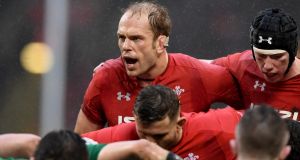 Alun Wyn Jones: an inspirational figure for Wales whose contribution to the cause cannot be summed up by mere statistics. Photograph: Alex Davidson/Inpho

I had hoped Ireland’s hibernation in that opening round against England was covert preparation for a more overt action in Cardiff but Ireland stayed in hibernation and were simply unable to nullify the gain line.

Much of my preview on Friday was centred on the Welsh defensive re-set and Ireland’s subsequent challenge in going forward; through kicking, carrying or lineout maul but maybe I should have used the simple term ‘exit’ for this is what separated the sides. Wales kicked off and Ireland couldn’t exit and were soon down by seven points. In six days had Ireland become France and Wales Ireland.

But then the real exit under pressure came from Wales; track the clock from 23 minutes to 35 minutes where the game was won and lost. Until that point Wales limited Irish lineout options by keeping the kicked ball in play and having a ridiculously low penalty count.

Ireland hit James Ryan but Wales won a scrum from their massive ‘stadium’ turnover at the lineout maul yards from their own line.

But Conor Murray knocked on at the lineout; scrum Wales and their exit under Irish pressure continued.

But then on 33 minutes Wales conceded a needless penalty in Ireland’s half and Ireland escaped. However, then Wales stole the poor Irish lineout with Tadhg Furlong coming offside and the Welsh exit is complete at 13-0.

Our starting props conceded six penalties with a seventh off the bench. When Wales were under massive pressure in that period Ireland couldn’t keep their foot on the dragons’ throat. For Ireland to get but three scrums tells a story of Welsh skills in the rain; oooh that roof, why was it open!

A word on the opening try. Throughout the match when an advantage was awarded to Wales they immediately dinked the ball over the Irish onrushing defensive line.

This they did for Hadleigh Parkes’ try. Ireland consistently defend with their scrumhalf out on the edges. Had he been in the traditional neutral position behind the ruck he would have mopped up several of these over the top Welsh chips; including Parkes’ try.

This wonderful competition provides us with legends throughout, but one stands out head and shoulders. The professional era has brought with it the most annoying of tables; the player’s statistic tables where all sorts of performances can be justified/eulogised by things like tackle count, ball carrying etc. etc. but not Alun Wyn Jones. For in AWJ I can see what he does. I saw his gut-wrenching sprint chase on 66 minutes.

Johnny Sexton had spilled the ball deep in Wales territory when left wing Adams collected and countered. Adams soon pumped the ball all the way to Ireland’s try line and who was the next Welsh player in play, AWJ.

I saw his early injury and heavy strapping, his holding of Irish backs, annoyingly and for too long in the breakdown, his gentle guidance of the referee (no barking from AWJ) his immense presence where the actual and the ideal coterminate. He is such a special, special player who exemplifies the actual versus the statistic; AWJ for impact.

A word too on Dan Biggar. Isn’t it amazing to see an outhalf smiling, happy with his colleagues whilst leading form the front? Of all the outhalves on Saturday he had cause to be ‘upset’ finding himself once again on the bench but when he entered the fray, he did so with such positive energy that became infectious to his team mates.

He’s helped in no small measure by the Gatland game plan, not burdened by Ireland’s option paralysis where he and his team know where they need to be in general play, not burdened by exactitude with team-mates abusing you if you’re not quite in the right place. Gatland’s game plan doesn’t appear to require that degree of perfection. And his team look the happier for it.

That said the Welsh defence led by Shaun Edwards is clearly exactitude of the highest level. To break it down Ireland needed low error go forward through their lineout maul which struggled, ditto their kicking game but the Welsh defensive onslaught continued unabated in the second half. Ireland kicked off long which Wales returned and the subsequent breakdowns and gainlines were all Wales leading to the next score 19-0.

Wales hammered Ireland’s ball carrying and far too often well behind the Irish gainline. Tackles count but especially when way across the gainline. Parkes made seven in total but that one on Jacob Stockdale was worth 50!

Once again, like in Rome, Ireland won 99 per cent of their rucks and herein lies the challenge when statistically Ireland had more possession than Wales, more territory, more defenders beaten and more ruck success yet they still lose 25-7. What is wrong? The gainline.

As noted above, Ireland’s pressure game was swallowed up by Wales (England and Italy) and factoring in the penalty count, the error count and the Irish style of bludgeoning where Wales were set the answer is in style. I did wonder on Saturday how a player like Sean Cronin, sitting at home, would add serious value.

Finally; regardless, Ireland remain a superb team but which team has progressed more this 6 Nations? Scotland or Ireland; see you in Yokohama.