‘You have to bank all these tough days. There’s no doubt about it, that was a tough day’ 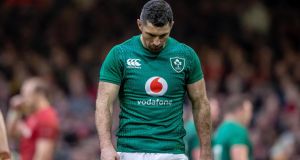 Rob Kearney has admitted Ireland are braced for heavy criticism after slipping from Grand Slam champions to mid-table in the space of a year.

Fullback Kearney believes Ireland must take the flak on the chin in the wake of their third-place finish in the Six Nations, that ended with a 25-7 thumping in Cardiff as Wales sealed the Grand Slam.

The British and Irish Lions star then pledged that Joe Schmidt’s men will not lose their nerve or the confidence in their approach.

“I’m sure there will be lots said about us as players and as a team over the coming weeks, but that’s part of being professional athletes as well.

“We just need to come together, close rank a little bit and never lose focus with how good we are as players, and as a team.

“It was pretty disappointing. They played pretty well, to be fair to them. Their defence is very good.

“Our discipline was quite poor and they just kept the scoreboard ticking along nicely. All of a sudden, we had a big old mountain to climb.

“We’ve done really well to win, and then this year we have come out the other side of that.

“Now, albeit the manner in some of the games, you can’t say that the margins are small because there have been a couple of heavy enough defeats.

“But we still have a huge amount of confidence in how we are as a team, in terms of what we can achieve as team.

“We just need to be realistic that there’s lots of other really good teams out there too.”

Jordan Larmour went over in added time as Ireland avoided failing to score in a Test match for the first time since 2012.

And in the wake of the comprehensive defeat, Kearney admitted Ireland must hang on to their Cardiff frustrations to fuel their fire for the autumn’s World Cup in Japan.

“You have to bank all these tough days. There’s no doubt about it, that was a tough day,” said Kearney.

“It was tough watching one of your competing nations lift trophies.

“So, that is a memory. It’s a picture that will live with all of us a long time over the next few months, and it will be brewing away.

“We just need to make sure we can use days like today to our advantage.”