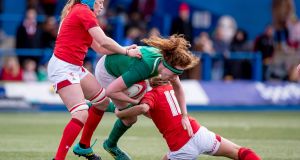 Ireland women had a St Patrick’s Day to forget as they ended an underwhelming Six Nations campaign with a 24-5 defeat to Wales.

Just a day after Joe Schmidt’s senior men’s side was blown away in Cardiff, the women’s team suffered a similar fate.

Beibhinn Parsons opened the scoring, but after that Ireland failed to score a point as a miserable weekend of Irish rugby in the Welsh capital was completed.

This was Ireland’s first defeat to Wales in the Six Nations since 2011.

Ireland were straight on the attack and camped themselves in the Welsh 22 as they dominated possession and territory. Hooker Deirbhile Nic An Bhaird was a lively presence with two superb breaks and finally the pressure told when the visitors spread the ball left for Parsons to score in the corner.

The conversion went wide and Wales finally got going. On their first attack Lleucu George found Kavanagh who flew down the wing to score past flailing Irish tackles.

Ireland weren’t helped by losing lock Nichola Fryday to injury and Wales lost No 8 Siwan Lillicrap to a yellow card for a high tackle, but it was the hosts who were the better side.

They grabbed their second try through Phillips following a driving lineout and George converted.

In a tight and scrappy second half both teams made mistakes as a bitterly cold wind swirled around Cardiff Arms Park. Ireland had plenty of ball, but they did little with it as Wales’ defence held firm.

Griggs replaced Nicole Fowley with Ellen Murphy at out-half in search of a greater attacking threat.

Wales kept the ball in the tight exchanges and Ireland couldn’t respond. Lewis was driven over from close range with 12 minutes to spare and it left the visitors up against it.

George nailed the kick in impressive fashion from wide out.

There was still time for more Irish misery as the outstanding Joyce ran in from more than 50 metres to seal victory for Wales.

Replacements: R Wilkins for Smyth, L Neumann for Kavanagh, F Lewis for Bevan, M Johnes for Butchers, A Callender for B Lewis (all 74 mins).