Ireland’s discipline and game plan unravelled long before the finish 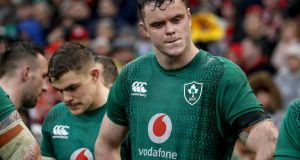 The ignominy of this Six Nations campaign will bruise, swell and cut Ireland deeply in the days, weeks and months ahead.

Watching James Ryan through the incessant downpour required binoculars. This was to be his coronation. The day he shaped up to Alun Wyn Jones and showed the long fellow of Welsh rugby that time waits for no lock.

Jones smiled on the young spirit before climbing up to collect the Triple Crown plate and shiny Six Nations trophy.

Old in sporting terms is not 33, even with the insane mileage AWJ has built up from 134 caps. No, old is a hooker who turns 37 in August. On this pitch in this fixture four seasons ago Paul O’Connell was a goliath, freakishly still the best player on view at age 35.

And then, seven months later, in the very same stadium O’Connell’s playing career was abolished by an exploding hamstring. The World Cup proved a bridge too far. Carted away with Ireland’s hopes and dreams, Rory Best ably filled the void. The son of Poyntzpass led Ireland where Brian O’Driscoll, Willie John McBride and O’Connell could not; scaling New Zealand’s north face, twice.

Despite Saturday’s performance in Cardiff, Best’s position – as starting hooker and captain – is secure ahead of the World Cup in Japan for two reasons: Niall Scannell and Seán Cronin.

Scannell is not a threat while Cronin, following his struggles in Australia last summer, was discarded by Ireland coach Joe Schmidt after a poor throwing display against Italy in Rome.

Watching James Ryan through the incessant downpour kept bringing Best into focus. The 22-year-old’s performance in general play was superb, even as Ireland were stomped into a 16-0 half-time deficit that in these conditions, which Schmidt insisted would be the rules of engagement, made it near impossible to recover.

Ryan coughed up a penalty that never was in the opening seconds for illegally smashing the rolling Welsh maul. No matter. Hadleigh Parkes gathered fellow Kiwi Gareth Anscombe’s advantage-prompted chip to splash over the Irish line.

Ryan immediately reacted by carrying into Jones and Ross Moriarty.

Before Tadhg Beirne’s scandalously good turnover on 12 minutes he made five dominant tackles in nine phases, all inches from the Irish try line.

Then he stole a Welsh lineout under Jones’ nose.

There ended Ireland’s joy out of touch.

“The big fella next to me,” said Schmidt on Thursday about Ryan calling Ireland’s primary attacking weapon. He has run lineouts in St Michael’s College, on the Ireland under-20s and twice for Leinster this season.

The first major examination came on 14 minutes. The four man lineout of Cian Healy, with Peter O’Mahony and Beirne set to lift Ryan, was a decoy. A quick shimmy saw Beirne launched high but referee Angus Gardner awarded Wales a free kick for “number five [Ryan] in the gap”.

Ireland’s luck didn’t travel to Cardiff. When Ryan drove Moriarty backwards, the fussy Gardner punished Beirne for going “in from the side” despite what looked a perfectly legal clear out on Josh Navidi.

At 10-0, with 18 minutes played, the Welsh stopped singing long enough for some unsteady Best throws to allow the Irish maul creep into the 22 but when Gardner awarded a Welsh scrum the crowd erupted.

Ireland kept coming through Keith Earls and Sexton but each time Jones stooped that massive frame to pound smaller men into the turf.

No other Irish man was making headway so Ryan charged once more into Moriarty and Jones. Ireland scrum, Ireland free kick, but CJ Stander made a costly mistake and Wales escaped. Back to Best’s throwing. The slippy ball did not stick to O’Mahony’s hands, which begs the question, what on earth was Schmidt thinking by keeping the roof open?

Stubborness can be an ally or a curse.

Ryan was the hunted now, suffering from a punishing collision with an angry Moriarty. Ireland penalty. He swallowed some liquid before calling a simple ball to Stander at the front. Adam Beard slapped yet another low throw and Jones burst weak tackles by Sexton and, worryingly, Seán O’Brien.

There was six minutes until half-time in a 10-point game when it became apparent that something was seriously wrong with Ireland. Tadhg Furlong stepped offside in the middle of the field for what felt like a sacrilegious mistake on any Schmidt team.

Next, Biggar majestically beat Stockdale in the air only to be bundled into touch by O’Brien. Best hit O’Mahony at full stretch but the maul reversed into the Irish 22 before Murray kicked straight to touch; 249 caps of Test match experience gifting Welsh an attacking platform in the biggest game of the year while trailing by 13 points.

Malfunctions everywhere, Ryan smashed Navidi but his hand, unluckily, glanced the ball forward. Cian Healy was harshly punished at the resulting scrum for penalty number eight, inside 40 minutes, compared to a total of 19 in the previous four games. The big screen showed Irish leaders losing their composure as Sexton flung the ball away in disgust, cursing, and Best spat choice words at Gardner.

At 16-0 under no roof and heavy rain the result seemed certain.

The second half descended into farce for Ireland as the usual control exerted by Sexton and Murray completely deserted them while a badly bruised, swollen and cut O’Brien was hauled off on 51 minutes. The ignominy of it all.