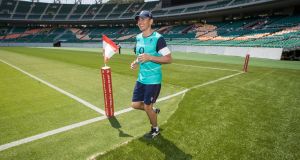 Actually, the former Munster coach is hosting Ireland at his NTT Shining Arcs. The squad will train next week in Tokyo’s eastern outskirts where Penney presently plies his trade.

For any serious rugby coach that’s no decision to make at all. The Walt Schmidt experience is passing through town with the most recent guest being Dempsey, Ireland’s primary fullback for a 10 year period, when Geordan Murphy was also gliding about the Premiership in Tigers hue, racking up 82 caps and some of the most memorable tries Irish people will ever know - Twickenham 2004 and England at Croke Park in 2007.

On retirement in 2010, of his own volition, Michael Cheika asked Dempsey to make the immediate leap into coaching.

“Cheiks and Colin McEntee, who was academy manager in Leinster at the time, approached me because they knew quite early that I was going to retire. I was happy in my own head that it was the right time to retire.

“There were a lot of young kids around - Lukey Fitz, McFadden, Dave Kearney and I didn’t want to be one of those players that try to hang on for the sake of it. I had achieved pretty much what I wanted to achieve in the game and had escaped without many major injuries.

“It felt right. They approached me and said they would love me to stay involved in the game, they felt I had the right temperament, and could be a good mentor to those coming up along, that I had the right skill-set to work with the academy. I took it from there.”

Now, age 41, he’s been shadowing Schmidt for the past week having re-signed for another season as Leinster attack coach under the guidance of Stuart Lancaster.

“Yeah 100 per cent,” said Dempsey about the value gained from working with such experienced operators. “I am a coach, I am very open. I am constantly looking to learn, Stuart has been there and done it. He has been a coach at the highest level and he has been excellent.

“We have got to a situation now where we are all dove-tailing quite well, we are all working in unison where we are all understanding our roles and responsibilities. There’s good opportunities to discuss rugby and challenge each other, and that’s where he’s not afraid to say why are you doing that, or likewise he is very open in saying can you explain why you would do that defensive system or why would you do something else.”

David Nucifora arrived as IRFU High Performance Director in the summer of 2014 with some clear intentions: Bring Johnny Sexton home and slam shut the international door on anyone else who leaves the island.

Spread the talent streaming out of the Leinster schools systems into other provinces. Grow some props and scrumhalves. Properly educate former Irish players already turned into coaches.

“It’s something that they are looking to grow,” said Dempsey of this newly streamlined venture that sees Munster attack coach Felix Jones arrive tomorrow. “This is the first stepping stone; the IRFU and David Nucifora are conscious of the growth and investment of really young coaches.”

And Penny revisits an Irish environment. Such gestures allow Dempsey and others to keep the coaching rotation going with stints at the Chiefs and Dave Rennie, and Tana Umaga’s Blues. Small pool. Constant opportunity to improve.