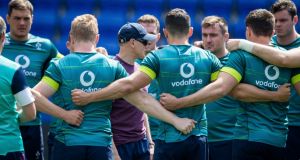 Joe Schmidt talks to the Ireland players during training ahead of the USA test last week. Photograph: Ryan Byrne/Inpho

Tony Brown is already in Japan. The highly rated Highlanders coach, tracked by Leinster and Connacht in recent seasons, was contractually obliged to take leave of the New Zealand franchise in order to provide the attacking verve with Japan behind head coach Jamie Joseph’s grunt.

That means the former All Black outhalf was denied the chance of a lifetime to pit his coaching wits against the Lions.

Outfoxing Joe Schmidt will have to suffice. On Saturday, a few hours before a Irish side were tearing USA asunder to the tune of 55-19, the Brave Blossoms began life under Brown’s tutelage with a 33-21 win over Romania in sweltering conditions in Kyushu.

“I knew in that heat they’d want to play with a lot of tempo and back their fitness,” said Schmidt of Japan. “And they did it very well. You could see how they managed to keep scrums to a minimum - and making just one handling error in the first half helps.

“I think they’ve got a really good balance in their midfield now, and they’ll be as big if not bigger than our lads there on Saturday. And what might surprise some people is that their aerial game is so good.

“You saw as well the quality of some of their big players: Michael Leitch, for example, is a really smart leader for the Chiefs [in Super Rugby] and his timing for that try was outstanding.

“And I’ve spoken to [former Munster coach] Tony McGahan about this kid [Amanaki] Mafi at No 8 - and he can really play. So I guess for us the challenge is to make sure they have no time on the ball.”

A real test match is promised at the Shizuoka Stadium in Fukuroi City on Saturday (kick-off 6am). At least the late arriving Paddy Jackson is almost certain to slot into the ‘10’ jersey after Joey Carbery’s poor showing against the US, and the 21-year-old’s ankle injury.

But Schmidt felt this past few weeks’ significant investment in youth, capping five players in New Jersey, has already paid off.

“To be honest I never really felt much pressure because most international teams do it now,” he continued. “I know with the All Blacks, they take one or two apprentice players on their northern tour.

“It might have been one of the Barrett brothers - Jordie or Scott who initially was going to come as the apprentice, obviously Scott played against us in Chicago.

“I think for the players at the start of the tour, I said ‘look this is a fantastic learning and working experience for you. The more you learn, the more work we’re going to give you because the big work comes on the weekends. So work your way towards that and we’ll try and support you in doing that.’ It’s pretty much as simple as that.”

The globe-trotting travel schedule means Ireland will only have a light training session in Tokyo on Tuesday before a 250km bullet train ride down the southern coast on Thursday as the first test is near their second base.

“We won’t train fully till next Thursday really. I’m not sure what we’ll do - we’ll see how guys pull up from this game. I don’t know - 16-18 guys missing who would normally play for us. It’s always easier to assimilate guys when you have other guys around them who know what they’re doing. So we’ve got a few less of that this time, which makes it a little bit more awkward.”