Three Irish players named in US team to face Ireland 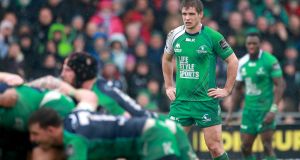 Quill has been part of the American squad for five years but missed out on selection for the previous defeat to Ireland (15-12) in June 2013.

Another Cork and Munster product, tighthead prop Paddy Ryan, who qualifies for the US via family, could make his debut off the bench.

The 26 year old’s brothers, Timmy and Dave, also came through the Munster system with Timmy playing for Toulon while Dave recently helped Agen secure promotion to the Top 14.

Ryan’s opportunity comes off the back of injury to Saracens prop Titi Lamositele.

Mitchell, who leaves the US set-up for the Bulls in South Africa next season, was also forced to plan without current Toulon backrow Samu Manoa, Cardiff wing Blaine Scully and Bristol centre Thret Palamo.

“These are hugely important players to us,” said US Collegiate coach Gavin Hickie who is working with the squad this week. “We are building depth all the time but we still don’t have depth comparable to a tier one nation. We are fully aware of that.”

Hickie, now a US citizen, is from Dublin and was capped 43 times by Leinster.

AJ MacGinty will win his 12th cap at outhalf.

1 Saracens’ emphatic opening salvo enough to keep Leinster at bay
2 Next stop the Champs-Elysées in green for Sam Bennett
3 Born to ride, born to win: Sam Bennett, the making of a green machine
4 Maro Itoje proves he has no peer in the northern hemisphere
5 Garry Ringrose: Leinster’s defeat to Saracens is ‘heartbeaking’
Real news has value SUBSCRIBE