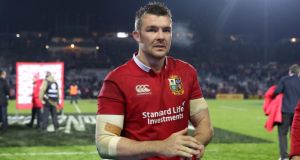 Peter O’Mahony has confirmed the knee injury he picked up in the Lions’ win over the New Zealand Maori isn’t serious. Photograph: David Davies/PA

Warren Gatland has hailed the Lions’ best performance of the tour to date, which even eclipsed even the win over the Crusaders a week ago.

The Lions led 12-10 at half-time, but scored 20 unanswered points in a one-sided second half during which they harvested well over 80 per cent possession and territory.

“We looked to do a few things at half time. There were a couple of stupid penalties in the first half that were costly and to only give away one penalty in the second half, I thought our game management was excellent in the second half.

“We probably played a little bit too much between the 10s in the first half when the conditions weren’t right. And it’s hard to get forward momentum early on in the game, because everyone’s pumped up and fresh but in the second half we squeezed the life out of them.

“We did that up front and we got in behind them and created some opportunities so it was a pretty clinical performance. In the night games you have to play to the conditions.

“It was slippery out there and I thought defensively, when you look at the attacking quality in their backline, and speaking to the players afterwards, they didn’t feel under pressure at all and didn’t feel like the Maori were able to stretch them at all and their one try was from a speculative kick that got a lucky bounce.

“We can be pretty proud of that performance but we know to play the All Blacks and beat the All Blacks we need to take another step up and hopefully we’ll see that next week.”

The performance and the win over the Maori was not, said Gatland, about sending a message to the All Blacks in the wake of their scintillating 78-0 win over Samoa.

“It’s been all about ourselves, and about ourselves improving from game to game. Every match is against absolutely quality opposition and we have been learning from those experiences, and benefitting from the opposition. It was another step up tonight. It was a really good performance. In terms of the All Blacks, we’ll start thinking about them a little bit more this week.”

He also said that Owen Farrell could have played against the Maori “at a pinch”, and that his absence was in part precautionary, thus intimated the English out-half should be fit for the first Test.

Peter O’Mahony also confirmed that the apparent knee injury which forced him off was not serious. “I am hugely honoured too. It is an incredible honour to be picked for the Lions. You get the jersey and it is an incredible feeling and to get the opportunity to run out first is a huge honour and I enjoyed every moment. It was a huge deal for my family as well. I thought out pack was good and the set-piece too, so happy days.

“I think as Warren said we’re building on performances; building on Saturday and Tuesday games and I think tonight was another step forward towards what our goal is; that is to beat the All Blacks and you’re going to have to be the best in the world and we don’t have a huge time-frame for that, but we’re using our time well.

“We used tonight well, our set-piece was good but there’s always room for improvement, you know? There’s a lot of things we can work on and we’ll go back to the video and have a look at those things and we’ll kick on into Tuesday.”