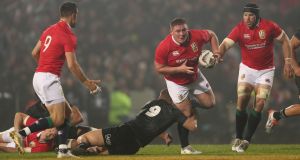 He’s yet to miss off the tee during this tour. He was very solid, with ball in hand and in defence, and is likely to retain the jersey for the first Test. Should also retain kicking duties. 7

A quiet outing with limited opportunities as the Lions kicked or kept things tight more often than not. Did nothing wrong and chased with intent. 6

He straightened the Lions’ running game, and made some great breaks - particularly one in the first half. He looked the most dangerous of the Lions backs. 7

Warren Gatland singled him out after the game, getting better and better he said. The battering-ram centre has all but secured the 12 jersey for the first Test with another physical, all-action performance. 8

His place is in doubt, looked short on confidence and hesistant in the contact. Made very little impact, with the chances he did get, and should’ve done better for the first Maori try. 5

Looks to be getting his mojo back. Took the ball right on to the gain line, mixed up his kicking game; he kept things on the front foot and played the conditions excellently. He is regaining his confidence, and form, at the right time. 7

The master of box kicks. Like Sexton he played the conditions and took advantage of the host’s nerves under the high, greasy ball. Put his body about too, and Warren Garland will be relieved to have one of his automatic picks come through in one piece. 8

A great all-round performance. Powerful and tireless in the loose and strong in the set piece. Played a big role in the penalty try too. Looks like edging Jack McGrath for the first test. 8

He headed the Lions’ dominance in the scrum. He carried well and was solid in the lineout, despite the testing handling conditions. 7

Excellent come scrum time, dynamic as ever in the loose. Powerful clear outs and carrying, his only negative being the concession of a first half penalty. Without doubt, the starting tighthead. 8

An incredible athlete. Itoje showed the strength of his all round game with seven tackles, constant carries and a great opportunist try. His understanding with Saracens team mate George Kruis could edge him ahead of Alun-Wyn Jones. 8

The English lock is the leader in the line out, and crucial to a dominant Lions set-piece which should be the corner-stone of their challenge against the All Blacks. 8

What a turnaround since coming in as a late replacement for Jamie Heaslip against England in the Six Nations. Was cool and composed as captain, and his team followed suit with a disciplined performance. Relieved to see his late injury isn’t serious, as he looks set to sneak the number six jersey. 7

Went the distance, as he continues to impress with his fitness and energy levels. Strong at the breakdown and carried well. Such a physical presence that he had the Maori unsettled. Should keep the shirt. 7

The new frontrow of Jack McGrath, Ken Owens and Kyle Sinckler maintained the upper hand in the scrum. Iain Henderson made some powerful carries, while Elliot Daly showed a lot more spark than North when introduced. 7

1 Next stop the Champs-Elysées in green for Sam Bennett
2 Born to ride, born to win: Sam Bennett, the making of a green machine
3 Keith Duggan: Surreal story of John Delaney needs to act as a wake-up call for FAI
4 Let’s face it, Saracens don’t really care that they are rugby’s most hated team
5 Donegal footballer tests positive for Covid-19 forcing squad into isolation
Real news has value SUBSCRIBE

Leeds win seven goal thriller as Premier League returns to Elland Road 17:29
Superior Germans get job done to take top spot from Ireland 16:33
Next stop the Champs-Elysées in green for Sam Bennett 16:07
Donegal footballer tests positive for Covid-19 forcing squad into isolation 15:30
Everton come from behind to put five past spirited Baggies 14:57
Crossword Get access to over 6,000 interactive crosswords