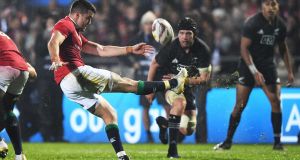 After the high skills and dozen tries of the All Blacks the night before, the Lions responded with a heavy dose of northern hemisphere rugby. The Maori were full of lively intent, but the Lions’ squeezed and strangled the life out of them with a controlled yet potent brand of wet weather rugby.

It says everything about the Lions’ dominance for much of the game that they kept both the Maori X factor players and much of the 28,177 capacity crowd fairly quiet.

On a sodden, foggy night in Rotorua, led by the all-action Peter O’Mahony, the Lions took something of a leaf out of the Munster manual against the Maori on a similar night in Limerick last November; with some good old-fashioned Cup rugby. The apparent knee injury which forced O’Mahony off was not serious.

After having only two scrums in the first half, the Lions had 10 more in the second with which to turn the screw, and how they did, devouring over 80 per cent of the territory and possession in that period.

The tourists used their flawless line-out to launch their maul, and used their big one-off carriers, Toby Faletau, Sean O’Brien, Mako Vunipola, Tadhg Furlong and both locks, as well as Ben Te’o, who was impressive again, to strong effect. While their clearing out was top notch. Vunipola and Maro Itoje also backed up all of this with a high work-rate in defence.

Outside them, Conor Murray had real presence at scrumhalf, he employed his kicking game to its customary quality effect, and managed the game well in tandem with Johnny Sexton, whose confidence appears restored. He seemed to be taking the ball closer to the gain line as well, made some good half breaks and offloads, and passed well, while also varying his game more, with one long touchfinder and a few up-and-unders.

The return of Jonathan Davies and his square lines straightened the Lions’ running game, he was also their most dangerous runner. Anthony Watson looked sharp if underemployed, while Leigh Halfpenny had a good solid game in tricky conditions at the back, and kicked seven out of seven.

For their part, predictably, the Maori adhered to their own credo kin taking a leaf out of the Highlanders manual by opting for quick throws whenever possible, putting more width on the ball and putting in little kicks behind the Lions’ wingers, a tactic made even more wicked by the greasy top and greasy pill.

As well as cohesion of their productive set-pieces, there were real signs of an increased understanding, not least between Faletau and O’Brien, who both had big, big games. The Lions made three line breaks to one and, rather amazingly, 10 offloads to three.

If there was a negative it was the recurring failure to convert those breaks and set-piece supremacy into more tries.

Allowing for the possible return of Alun Wyn Jones, this is now the Lions pack for the first test. It may well be the same halves and midfield too, depending on the injury to Owen Farrell, while Halpfenny and Watson will probably start next Saturday. But George North again looked short of his confident best, almost checking before contact.

The extent of this win should turn the heat off Warren Gatland for adhering to his long-stated intention to call up short-term cover in the week of the first test for Tuesday’s game against the Chiefs.

The All Blacks presumably won’t be releasing any of their 23 to the Chiefs either.

The Lions may be a commercial machine, but their streams of revenue are entirely dependent upon their commercial partners, as they don’t accrue any of the TV revenues or gate receipts, so the proximity of the Welsh and Scottish squads counts over the rival claims of superior English and Irish players. It’s not ideal, but it’ the way it is.

The sunshine of the last few days gave way to steady if light rain from lunchtime onwards, which must have made the grassy banks at both ends of the ground very tricky for the thousands who were assembled there. As kick-off neared a heavy mist descended on the ground which was almost foreboding, but the ring of houses with their own brand of indoor entertainment looked to have the best seats in the place.

Two quick throws and two wicked kicks in behind, emulating the Highlanders’ tactics, were an early signal of the Maori intent

The pre-match haka, predictably, was a fairly high octane and perfectly synchronised march and challenge, which the crowd loved.

The expectation was for a fast start, by the Maori, but maybe the home side were too pumped, and certainly so in the Leinster bound James Lowe, whose powerful left boot overcooked a touchfinder out on the full. This afforded the Lions the first set play, a line-out outside the Maori 22.

Ben Te’o made some initial hard yards, and Sexton made a good half-break and offload inside to Furlong, and he did likewise inside to Murray. The controlled 15 phase attack yielded a penalty against Liam Messam for not rolling away and Halfpenny opened the scoring.

From a Lions’ drive off O’Mahony’s take, Lowe could not deal with a towering up-and-under from Murray and under pressure from Watson, Reiko Ioane played the ball from an offside position. Halfpenny made it 6-0.

So far so good. The Lions had controlled the opening 10 minutes. But this early control was wrenched from them in utterly contrasting fashion.

Two quick throws and two wicked kicks in behind, emulating the Highlanders’ tactics, were an early signal of the Maori intent. For the first, North couldn’t hold the ball above him, leading to the second quick throw, and a few phases later, the Welsh winger couldn’t deal with a wicked little grubber by Nehe Milner-Skudder in behind him.

North slid onto the ball but it squirted out of his grasp and Liam Messam was quicker to the loose ball than Halfpenny, kicking on into the in-goal area and winning the touchdown. Damien McKenzie converted and a couple of minutes of heads-up rugby had proved a point more fruitful than 10 minutes of sustained good work by the Lions.

However, a chip by Lowe, who then ran into George Kruis, was gathered by Murray for North to counter-attack. Furlong and O’Brien, twice, trucked it up before Sexton saw a gap, accelerated and offloaded to Davies, who made a huge break close to the Maori line. A penalty for offside enabled Halfpenny to push the Lions back in front.

The lead soon exchanged hands twice more. After conceding a scrum in a choke tackle, Itoje held onto the ball after the whistle to concede a penalty which McKenzie landed. But when Itoje, whose workload was immense, tackled Matt Proctor, Vunipola was immovable over the ball.

Sexton pushed the ball up the line, and a strong maul and good close in rumbling, notably by O’Brien again and accurate clearing out led to a penalty for “at least two” Maori players obstructing in front of the ball. Cue Halfpenny’s fourth penalty.

After another quick throw, which seemed to happen after the line-out had been at least partially formed - a point O’Mahony made to Peyper - McKenzie easily had the legs with a towering 60 metre penalty, but not the direction.

Davies made a fine covering tackle on Milner-Skudder before the Maori opted to go up the line and launch one last flurry rather than take a shot at goal. Messam carried well, Tawera Kerr-Barlow had a snipe before Charlie Ngatai took a hard inside line only Toby Faletau to make a fine tackle. Itoje was over the ball to ensure the Lions held their slender and hard-earned 12-10 lead at the break.

A huge, rumbling maul from McKenzie’s second-half kick-off established the Lions’ intentions, and earned a penalty. Up the line they went, another maul, more close-in rumbling by O’Brien and Vunipola, and when Kerr-Barlow came through on Murray, Halfpenny extended the lead to 15-10.

When McKenzie’s restart didn’t go 10, back came the Lions. Lowe spilled a huge up-and-under from his future Leinster teammate Sexton, albeit under no pressure, and when Kerr-Barlow came through on Murray, Jao Peyper gave the Maori a warning.

It wasn’t heeded. When Halfpenny carried hard off Murray’s pass and was tackled by Reiko Ioane, Kerr-Barlow caught the fullback with a shoulder to the jaw. The Lions went to the corner and the drive was held up and after a hard line and carry by Te’o, Jamie George picked and appeared to reach the line.

Inadequate camera angles contributed to the try not being awarded, but another scrum and penalty later, the Lions scrum splintered the Maori pack and Peyper marched under the sticks, although Faletau, who showed good control, would have scored again.

Now the Lions turned the screw, and it was Davies who put a couple of wicked grubbers in behind, the second after Murray had easily tracked a poor chip out of defence by McKenzie. Halfpenny and Watson tackled Ioane over the line, and from another five metre scrum and close-in carries, Itoje was helped over the line by O’Brien. Halfpenny made it 29-10.

O’Brien possibly went for an unnecessary offload after supporting Faletau’s carry and offload, but made more than handsome amends with a muscular steal from which Iain Henderson, with his first touch after replacing Kruis, rumbled impressively to within inches of the line.

Before Kerr-Barlow returned, the Lions went to the corner again, and although the Maori repelled a scrum, Itoje was helped over the line by O’Brien. Halfpenny converted and tagged on another penalty for offside.

Before the end O’Brien - who was still going strong - was livid after an incident on the ground with Charlie Ngatai, but recourse to the video revealed nothing.