‘For our guys, if they have missed an opportunity because of the logistics, it is tough’ 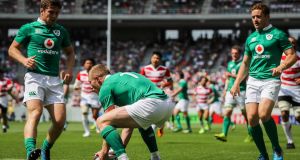 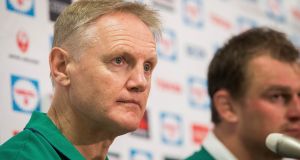 Joe Schmidt talks to the media after the game. Photograph: Inpho

Ireland coach Joe Schmidt was made aware before the Lions tour of New Zealand that Warren Gatland would call up Welsh and Scottish players over Irish and English players due to their “closer proximity” to the squad.

“For our guys, if they have missed an opportunity because of the logistics, it is tough for them,” said Schmidt after Ireland’s 50-22 victory over Japan in Shizuoka.

As it currently stands, no Irish players will be added to the Lions squad now that Gatland has called up Welsh men Cory Hill, Kristian Dacey, Gareth Davies and Tomas Francis along with Scottish prop Allan Dell and outhalf Finn Russell.

“I have had no contact from the Lions at all,” said Schmidt. “I was aware that it was likely that players were going to come in for that Chiefs game (this Tuesday)before they left (for New Zealand). That was always part of the plan.

Cian Healy, who Schmdit said was playing “like a man possessed, can feel heard done by being overlooked while it is believed that Keith Earls, Simon Zebo and Garry Ringrose remain on the Lions waiting list in the event of injury.

“The practicality of it makes sense. Going into a test match against the All Blacks with four, five, six of your players having played on the Tuesday, jeez, not in the modern game. It used to be the way, not anymore.

“I think with the attritional nature of fully professional rugby I think it is a smart move to have some cavalry roll in and assist the squad and to protect your 23.

“Because you cannot beat the All Blacks with 15 players. You need a fully fit group and a full week of preparation.”

Schmidt was specifically asked if selection being based on proximity over a players ability demeans the Lions jersey and its values.

“It’s just difficult. I guess you could ask Simon Easterby, he was worn the jersey, he was selected to wear it and wore it proudly, I think Keith Earls has worn it before.

“I can’t speak for them. I am only the coach of the team we have currently. I am delighted to have the players we do have but I would be more delighted if some of them did get picked out as it would be representative of the effort they are putting in.

“The selection protocol is entirely up to them. Some of our players based on their performances were probably close right back at the original selection. The ones that are fit have come away on tour with us and have been phenomenal; they’ve been super for us. I hope they still have a chance, you don’t wish ill on anybody, but if someone picks up an injury they could still get called in.

“It’s not for me to anticipate others selections,” Schmidt added. “We keep it very Ireland focused. I know Earlsey is incredibly proud every time he plays for Ireland. That’s incredibly apparent about the way he goes about his work, we saw it last week, we saw it today. He’s in great form.”

Earls ran in two tries at the Ecopa stadium to surpass Denis Hickie’s record of eight tries for Ireland in the 2002/03 season.

“Keith has had a great season.”

For an Irish player to get from the current base in Hamamatsu to Tokyo and on to Auckland would take at least 16 hours with a three hour time difference.

This could have been initiated at any time in the past week but Gatland, Schmidt revealed, had always intended to use Welsh players based in New Zealand - he is the national head coach of Wales - and Scottish players in Australia.

“Personally, I do see that making sense.”

Schmidt refused to rule any Irish players out of next Saturday’s 12th and final Irish test match this season but Simon Zebo (recurring knee), Rhys Ruddock (who passed the Head Injury Assessment), Paddy Jackson (shoulder and ribs), Luke McGrath (blurred vision), Dan Leavy (stitches) and Finlay Bealham (blood) will be assessed over the next 48 hours.

Ulster flanker Sean Reidy and scrumhalf John Cooney are the only tourists yet to feature.