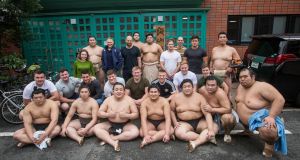 Ireland players and management pose for a photo with sumo wrestlers at Shikoroyama-beya in Koto-ward in Tokyo. Photograph: Ryan Byrne/Inpho

For this dry run ahead of the 2019 World Cup, it’s long established that Paddy Jackson would feature at outhalf against Japan on Saturday at the Shizuoka Ecopa Stadium but Joe Schmidt is also expected to name Simon Zebo at fullback and Andrew Conway on the right wing.

That means Tiernan O’Halloran and new cap Jacob Stockdale will make way. Jackson, who missed the US leg of this tour due to personal reasons, was always going to replace Joey Carbery, even before the 21-year-old suffered another ankle injury but an unchanged pack is a statement of intent entering this two match series.

“I think there’ll be a little bit of continuity,” Ireland assistant coach Richie Murphy had confirmed.

“We didn’t come over with the idea of making changes just to keep everyone happy. The first match here is going to be very tough. Japan are a good side, play some really good rugby so we’ll try keep some of the combinations we had, and just freshen it up a little at the same time.”

Changes are coming on the bench. James Tracy replaces Dave Heffernan as hooker cover, Finlay Bealham appears to have ousted Andrew Porter and, as Schmidt indicated after the 55-19 victory over the USA, Kieran Treadwell will make his debut at second row.

On merit, James Ryan and Porter deserve another run but it is envisaged that both have long international careers ahead of them. The former only featured in his first senior match as a professional last weekend, the latter has scrummed just six times as a tighthead (four of them for UCD).

Ireland’s primary foe will be the stifling humidity promised by a 2pm kick-off (6am Irish time). It reached 33 degrees in Harrison, New Jersey last Saturday but the callow American opponents failed to make Schmidt’s young side sweat.

“Yeah, it was warm, tough to breathe, and from what I hear it’ll be even warmer this week,” said Josh van der Flier, who discarded that famous red scrum cap.

“Yeah, I tried it during the week and it was too warm, so I thought it’d be a bit more comfortable without it. It’s the first time in about 15 years I haven’t worn it. I’ll probably take it off this week if it’s too hot again.”

Despite mounting injuries, this remains a decent Japanese side – even if the administrational side of rugby in the country leaves a lot to be desired two years out from their World Cup. As it currently stands there will be no wifi at the 50,889 capacity Shizuoka Ecopa stadium, which is one of 12 venues eventually listed for 2019, on Saturday.

At least they are well coached now. Tony Brown has begun translating his attacking playbook while Jamie Joseph laid the groundwork for the grunt displayed by the Highlanders in victory over the Lions last Tuesday morning.

The 28-year-old New Zealand-born flanker Michael Leitch, a regular for the Chiefs in Super Rugby, is supported by Tongan number eight Amanaki Mafi in a menacing backrow while Fumiaki Tanaka is a proven scrumhalf in Super Rugby with the Highlanders and more recently the Sunwolves.

Another Kiwi, Sean Reidy, who qualifies for Ireland via his Kerry grandmother, arrived from Auckland this week to replace the injured Tommy O’Donnell.

For many this could be their last chance to wear a green jersey before the World Cup. Bealham is one such player as John Ryan’s dominant scrummaging for Munster, coupled with the rise of Porter, is putting severe strain on the Australian, who is Irish-qualified via an Enniskillen grandmother.

Factor in the situation Tadhg Furlong and Jack McGrath find themselves in New Zealand, and the Irish propping department has never looked so healthy.

Bealham, Conway, the uncapped Rory O’Loughlin, Ulster-bound scrumhalf John Cooney, Jack O’Donoghue, Reidy, Treadwell and of course Jackson are the tourists without any minutes so far.

In other Tokyo stories, a fully clothed group of Irish players and coaches took in the early morning sumo training at Musashigawa-beya in Edogawa ward on Wednesday. John Gunning, an Irish photographer and former sumo wrestler, helped facilitate the visit.

Fascinatingly, on the sushi front, scrumhalf Kiernan Marmion provided a glimpse into life as a professional rugby player: “We don’t really get to choose what we get to eat most days. The Ireland nutritionist puts out what we have to eat. It’s all been good so far and all really enjoyable. We just eat what we get given.”

So do we Kieran.