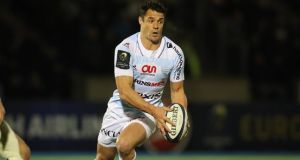 Dan Carter believes the Lions will improve ahead of the first Test against the All Blacks. Photograph: Ryan Byrne/Inpho

Former All Blacks outhalf and World Player of the Year, Dan Carter, believes the Lions have time to improve before the first Test match against New Zealand in 10 days time.

Already with two defeats from four matches and a number of injuries threatening to curtail Warren Gatland’s selection options Carter, speaking at the launch of the SoftCo Charitable Foundation, said the Lions will take time to figure out which combinations work best for the team.

“They’ve definitely got a chance, it has been a tough start for them but Test match footy is completely different and at the back of their mind that will be their focus,” Carter said.

“Even though they’ve been a bit up and down so far, they’re starting to build as a team and play for one another, which is good and always something you need. It always takes a few weeks to get those combinations and get that feeling for your team-mates as well.”

Carter added that come Saturday week many of the glitches will have been ironed out and a stronger Lions team will take to the field at Eden Park in Auckland.

That, at least, has been the tradition.

“In a week and a half I think we’ll see a much stronger performance,” he said.

“It’s hard for me to be against my country and my team, which I won’t be doing. But I think we’ll see a much better performance from what we’ve seen from the Lions.

“You have to put things into context. They literally arrived in the country and had a game almost straight away. I think they’re just finding their feet and building combinations and working out how they want to play and things like that.

“I think they’re only going to get better and as a Kiwi I’m definitely not writing them off even though some of the media say they might struggle. I think we’re going to see a much different performance in the first Test.”

Carter also suggested that the Lions, in their first four games, would have kept some things back in an effort to provide some element of surprise come the first Test match.

“They’re keeping a bit up their sleeve as they don’t want to give away too much,” said the Racing ‘92 star.